There’s a smartphone app for that

Smartphone apps have created a world of convenience for many of us. 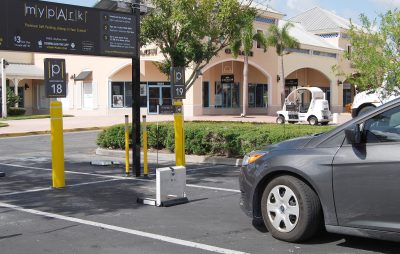 After downloading the MyPark app and registering, all the user has to do is hit “Let Me In” on the smartphone screen to get the barrier sign to fall at the assigned space.
CARL MARIO NUDI PHOTO

Like when you are ready to leave for work you want your thermostat temperature to be lowered so the air conditioning begins to cool off the house before you get home. There is an app for that.

Or you may want to send an album of photos of all the grandchildren to your friends and family. There is an app for that.

And now when you arrive to go shopping at the Ellenton Premium Outlets there is an app to reserve a parking space for you.

Shoppers going to the outdoor shopping mall off I-75 and U.S. 301 in Ellenton can download the MyPark app and have their own parking space up close to one of three entrances to the shops.

“This is one of the most convenient ways to park at these locations,” said Luis Mayendia, co-founder, president and CEO of the Miami-based MyPark Corp.

Mayendia said he developed the app to be easy to use.

After the user downloads the MyPark app from the App Store or Google Play and registers their payment method information, they can find what venues have the MyPark spaces and where they are located at that venue.

The price for this service is $3 for the first two hours and then $3 each additional hour, all charged to the credit card you designated when you registered.

“Once a space is assigned, you control it,” Mayendia said. “When you arrive at your space you hit “Let Me In” (on the smartphone screen), the sign (barrier) goes down and you park.”

The 16 MyPark spaces at Ellenton Premium Outlets are located at three convenient areas of the parking lot:

Section A, five spaces in front of the entrance by J. Crew Factory, Sunglass Hut and Hurley,

Section B, three spaces in front of the entrance by Starbucks, Express Factory Outlet, Movado Company Store and All Sell Depot, and

“Sometimes (on very busy shopping days) people have to park in the back area, but this way (with MyPark) they can park closer to their destination store,” Vega said.

She said the shopping center has become a destination spot with people coming from all over the Tampa Bay area.

“Ellenton Premium Outlets has 120-plus stores, and it’s a very beautiful place to walk with beautiful fountains and landscaping,” Vega said. “It’s a nice shopping experience.”

The MyPark spaces were installed in mid-July and since then they have become more popular, she said.

“I’ve noticed they are consistently being used,” Vega said. “On Saturdays, about 90 percent of the spaces are filled.”

The Ellenton Premium Outlets has about 2,500 parking spaces, and on weekends and during the holidays finding a parking space can sometimes be trying.

“With MyPark you can make a reservation up to six months in advance,” Mayendia said, “This is good for weekends for dining or holiday shopping.”

Mayendia cofounded and developed the MyPark app with Ricardo Blanco in 2013.

Mayendia studied mechanical engineering and business administration at the Florida Institute of Technology.

Mayendia was the general manager of a large water-bottling company in Puerto Rico for over eight years, where he oversaw the complete operation of the plant.

After moving to Miami in 2013, Mayendia and Blanco designed the MyPark app.

In 2016 they installed the system at its first major site and received two patents for the app in 2017.

MyPark has 11 locations throughout Florida, and at about 10 more venues in Minnesota, New York, New Jersey, Georgia and Puerto Rico.

As the MyPark becomes more popular, Mayendia expects it to be installed in other locations.

“We’re getting feedback saying (the users) will be coming back (to the shopping center) more often,” Mayendia said. “Parking can be a turnoff, but MyPark makes it easier to enjoy your shopping from start to finish.”

He said the app has been getting five-star ratings. 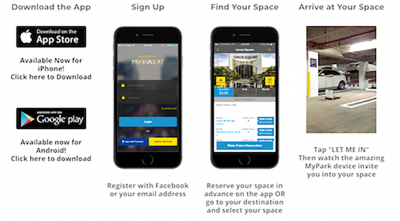 The Tropical Snow kiosk is at the front of the walkway to the Section C entrance to the Ellenton Premium Outlets.

Lew has a full view of the MyPark spaces at that location and said on busy days at the outlet mall the spaces have their highest use.

“Usually the ones by the center of the mall are used more,” he said. “And I noticed they have free WiFi — that’s cool.”

Lew, who has been at Tropical Snow for three years, said he thought MyPark was a good idea.

“It will get a lot of use during certain times of the year when the mall is really busy” he said.

As an incentive for shoppers to try the MyPark app at Ellenton Premium Outlets, the company is offering a free trial of the program for first-time users.

“I encourage everyone to try it for free,” Mayendia said. “Just use the promo code “MYPARK1” when downloading the app and registering.”

The user’s first session will be free of charge, he said.

For more information about the MyPark app visit the website at www.usemypark.com.

For more information about the Ellenton Premium Outlets and Simon Property Group go to the website www.premiumoutlets.com/outlet/Ellenton.