Among the factors making Sun City Center a great place to live is one many residents take for granted, that is until they need help. 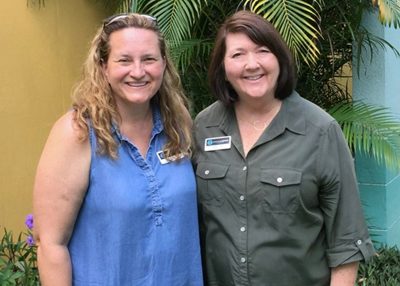 Robin Ingles, left, and Tammy Criollo, of Seniors in Service, and Bevan Rogel, of Encore Tampa Bay (missing from the photo), are the facilitators of Gen2Gen, a project funded by the South Shore Council of the Community Foundation of Tampa Bay to learn why volunteerism is declining in Sun City Center, and determine ways to encourage seniors to get involved in their own community and with youth-serving organizations in South Shore.
LOIS KINDLE PHOTO

The community’s array of free services, which include transportation, ambulance and security, have depended entirely on volunteers who freely invest their expertise and time to help their neighbors. Without their spirit of giving, the services residents come to rely on as they age could one day cease to exist.

Unfortunately, volunteerism and civic engagement in Sun City Center has declined in recent years, so much so that a collaborative partnership called Gen2Gen (between Seniors in Service and Encore Tampa Bay) has been formed to find out the reasons for the decline  and to determine new ways of encouraging seniors, especially the increasing number of Baby Boomers, to get involved. It’s also looking at ways to get seniors more involved as mentors at youth-serving organizations in southern Hillsborough County.

“The Gen2Gen project was funded by a grant from the Community Foundation of Tampa Bay on the recommendation of its South Shore Council,” said Wilma Norton, vice president of marketing and communications for the foundation.

The $24,489 grant came from an endowment made by longtime Sun City Center resident Hazel Bryson before her death “to downplay selfishness, greed and ethnic hatred and meet the needs of deserving people,” Norton said. “This Gen2Gen project brings together two areas of focus for our work in the South Shore community: Helping children be more successful in school — and ultimately more productive adults — and boosting volunteerism. The dwindling number of neighborhood volunteers was one of the areas of concern raised by Sun City Center residents in the community needs’ assessment we conducted last year, and one of the reasons our South Shore Council found this project appealing. If we can ignite residents’ enthusiasm for volunteering, that’s a terrific outcome.”

Volunteering is an investment that benefits both giver and receiver

“Those of us who do [volunteer] benefit in a number of ways,” said Robin Ingles, director of marketing for Seniors in Service. “Not only do we feel good doing it, we’re part of something larger than ourselves. It fills us up and connects us to each other.

“Many of the services we’re aiming to help are not feel-good services,” she continued. “They’re essential services residents rely on.”

“Volunteering for something people are passionate about helps keep them happy and fulfilled the rest of their lives,” added South Shore Council Board member Debbie Caneen. “It actually benefits their health. According to experts on aging, giving to others helps [the giver] live longer.”

Since January, Gen2Gen has been working with a large group of folks from community, civic and nonprofit organizations to accomplish its goals. In May, it presented a list of findings and recommendations to the South Shore Council that will be continually refined until its final report later this year. These include ways to increase awareness of the issues; ways of reeducating folks on the importance of civic volunteerism and its impact on others; and ways of developing the culture of “neighbor helping neighbor” that used to exist in the community (and still does among older seniors still capable of volunteering).

Do something you love

There are all kinds of ways to volunteer while doing something that interests you. Whether you’re passionate about the elderly, kids, animals, healthcare, cooking, driving — you name it — there’s an organization needing your area of expertise. And some nonprofit groups ask for as little as a couple of hours per month.

“I believe there’s a way for everyone to get involved, a way for them to use their passion and skills to improve the quality of life in their community,” said Tammy Criollo, president and CEO of Seniors in Service.

To learn more about how you could help, call Ingles at Seniors in Service, 813-932-5228 or Bevan Rogel, founder of Encore Tampa Bay, at 813-390-1010 to express your interest. They will be happy to direct you to an appropriate organization.

Editor’s note: This is the first in a series of articles to be published on the subject over the next several months.