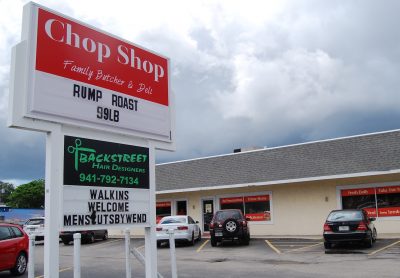 CARL MARIO NUDI PHOTOS
The Chop Shop has been at the West Bradenton location of 5906 Manatee Ave. W., since 1971 when Pat and Steve Stivers opened the store.

Sometimes small family businesses are forced to close their doors when big-box stores and chain groceries move into a community.

But other times some of the locally owned businesses learn to adapt and thrive in such a competitive environment.

The Chop Shop was one of those family businesses that has survived the test of time.

The butcher shop and food store at 5906 Manatee Ave. W. in Bradenton, not only endured the pressures of big business marketing, but is now being run by a second generation of the family who started it in 1971.

“We have to have something else that sets us apart from Publix because we can’t beat them in prices,” said Susan Higbee, daughter of Doug Stivers, one of the first-generation store owners.

“There’s nobody around like us,” Higbee said. “We have good quality, good service and the small-town atmosphere.

“And we listen to our customers,” she said.

The store’s specialty is the butcher shop, which sells cut to order prime meats and poultry.

“We’ve always bought the best of the best in the quality of meats,” said Higbee’s brother, Mike Stivers, who helps manage the store with her.

They buy their meats from very small ranchers and farmers who feed their animals only plant-based feed with no additives, Stivers said.

He said the family ranchers and farmers also use humane methods in raising and slaughtering their animals. 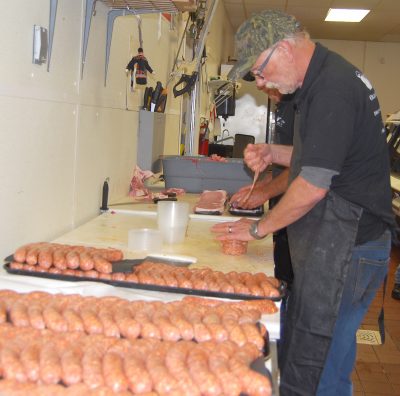 Butcher Dennis Wolfe, who has worked at the Chop Shop for about two years, stuffs sausage recently between waiting on customers.

The Chop Shop also stocks imported gourmet foods as well as everyday items; fresh fish and seafood, some locally sourced; fresh produce; and has a delicatessen that serves hot foods for take out.

Stivers said the growth of Manatee County also has helped expand the store’s market base.

“When the store was first started there wasn’t much on this end of Manatee Avenue,” he said.

Higbee and Stivers’ aunt and uncle, Pat and Steve Stivers, opened the store in 1971 after working a couple of years at the old Foodway on Manatee Avenue West.

“Uncle Steve was the meat manager there,” Higbee said.

Before then they were living in Lexington, Ky., and would come to Bradenton to visit relatives when they decided to move to Bradenton.

Higbee and Mike Stivers’ father, Doug Stivers, came down to help his brother and sister-in-law run the store.

Their mother, Carolyn, stayed in Lexington to run the the small grocery store they owned.

After a while Doug Stivers thought it would be nice to have his family in Florida.

“Dad called and asked Mom if she wanted to move to Florida,” Higbee said. “She said, ‘Why not.’”

So Carolyn Stivers packed up her three children and her mother and moved to Bradenton.

In the early 1980s, Doug Stivers and his sister-in-law, Pat Stivers, became the owners of Chop Shop and ran it until they retired and turned it over to Doug and Carolyn’s children, Mike Stivers and Susan Higbee. 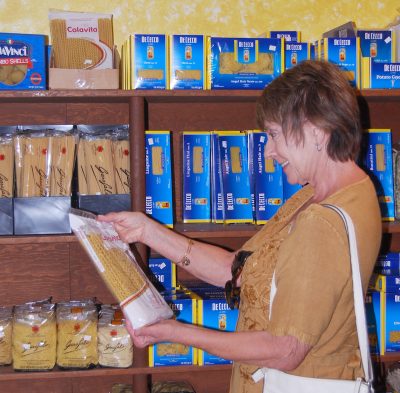 Susan San Lucci, who with her husband, Angelo San Lucci, has been shopping at the Chop Shop for about five years, checks out the dried pasta selection.

Pat Stivers retired around 2008, but Doug Stivers only semi-retired in 2010.

“He comes in every day to make sure everything’s running right,” said his son, Mike Stivers.

“He’s the wine guy,” said Higbee. “He takes care of our wine stock.”

Taking over the business seemed natural for Mike Stivers and his sister.

“We worked in the store as teenagers,” said Stivers, who has three children. “We grew up in the shop.

“I loved it because I always had money in my pocket.”

Stivers and Higbee’s children have worked at the Chop Shop.

“This is possibly something to hand over to the kids,” said Higbee, who has three children.

Their brother, Stephen Stivers, also worked at the store when he was younger, but then joined the military,

“When he came back he worked at the store, then moved on to do other things,” Mike Stivers said. “But he always comes back here to work.”

Stephen Stivers started back working with his siblings again on June 4.

It was the close family ties that helped with the Chop Shop’s success and that family feeling spreads to their customers.

“We know most of our customers by their first names, and we know their kids,” Higbee said. “They like the personal service.”

The personal service and family-friendly atmosphere is why Susan and Angelo San Lucci shop at the Chop Shop.

“Everyone is so polite, and the butchers are so nice,” said Susan. “It’s wonderful. You can’t beat the butcher shop. They have the best meats and poultry.”

The Bradenton couple moved to Manatee County from the east coast of Florida seven years ago. They came to Florida from up North.

“We’ve been shopping here for five years,” Susan said. “We heard about it from our friends. 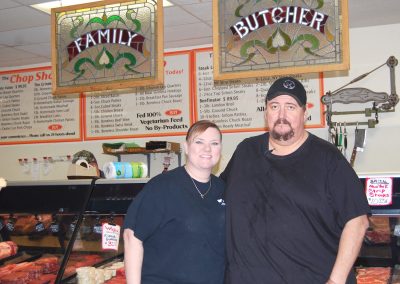 Susan Higbee and her brother, Mike Stivers, stand in front of the meat cases of the Chop Shop, 5906 Manatee Ave. W., Bradenton, which they manage as second-generation store owners.

“It’s like the places I went to when I was growing up,” said Angelo.

“It’s like the family store on the corner (in the old neighborhoods),” he said. “The only thing missing is the sawdust on the floor.

“And the butchers cut your meats anyway you want — thin like in Italy.”

The specialty items were another reason the couple like the Chop Shop.

“I like all the Italian products they carry,” said Susan. “There’s more of a selection than at the grocery store.”

“And everything is prepackaged at the big grocery stores,” Angelo added.

Loyal customers such as Susan and Angelo San Lucci are what help make the Chop Shop successful.

“There are a lot of snowbirds who are customers (during the season),” said Higbee. “But we have enough local customers to keep us going.

“They are our base.

“It’s nice when the snowbirds come back and say, ‘hi, it’s good to see you,’” Mike added.

He said their customer base has always been the older generation.

“We have a lot of seasonal residents who shop here,” Mike said, “But now we’re getting a younger clientele with families.

“Some of them are the kids of the older customers.”

The younger customers have prompted Higbee and Stivers to stock some different items and expand others, such as adding more seafood and the hot take-outs.

“But we don’t want to change too much,” Higbee said. “We want to keep it as it was when our father and aunt ran it.

“We want the same homey, small town feeling,” she said.

For more information about the Chop Shop, visit its website at www.chopshopgrocer.com.