Be in the know before, during and after a hurricane 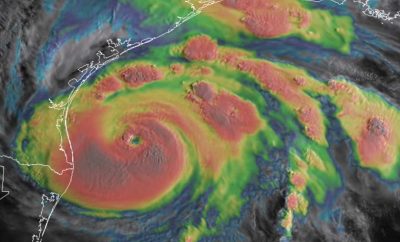 The 2018 Hurricane Season is June 1 through Nov. 30, so now is the time to get informed on how to fully prepare. Shown here is a 3D image of Hurricane Harvey making landfall in Texas last August.
National Oceanic and Administration Photo

The 2018 hurricane season is under way, and we’ve already experienced its first named storm. Making landfall May 28, Subtropical Storm Alberto dumped heavy rains across the entire state, and then moved across the Florida Panhandle and northward through the Gulf Coast states.

That’s one storm down and nine to 15 more to go, say forecasters at the National Oceanic and Atmospheric Administration (NOAA). This year they’re calling for a total of 10 to 16 named storms, five to nine of which could become hurricanes, with one to four developing into major hurricanes.

Community Resource Deputy Jeff Merry, of the Hillsborough County Sheriff’s Office, will present three seminars on hurricane preparedness this month. All are free, open to residents of Sun City Center and surrounding communities and will take place as follows:

Each will include tips on how to personally prepare for a major storm; provide information on the difference between hurricane watches and warnings; and explain how the sheriff’s office will respond locally after a major storm.

“I’ll be talking about what to do in advance of a hurricane, what supplies to stock and where to get them, and discuss sources of communication before, during and after the storm,” Merry said.

Last year, many in the area were unprepared and uninformed as Hurricane Irma threatened Tampa Bay. Panicked residents called the offices of the Sun City Center Community Association, Kings Point Federation, Sun City Center Area Chamber of Commerce, Sun City Center Emergency Squad and Sun City Center Security Patrol at the last minute to ask about shelters, evacuation sites, what to do with their pets and even where they could get water, Merry said. Of course, everything was closed.

Although Irma ended up skirting by us, parts of the community lost power for anywhere from eight to 36 hours, and there were folks whose medical equipment couldn’t work and others who ran out of their medications. Twenty homes along Augusta Drive and Plaza West lost power for six days.

Proper planning is critical for situations like these, Merry said. It could have been much worse.

This year, the United Methodist Church of Sun City Center, 1210 Del Webb Blvd. W., will serve as a POD drop-off site, where water, food and tarps will be stored for aftermath recovery. When and if necessary, the Sun City Center Community Emergency Response Team will handle distribution, Merry said.

The HCSO and community officials will be housed at the Ham Radio Operations Center at the Community Association during and immediately after a major storm. If phone service and Internet connections go down, they will handle communications from there.

“If they go, they’ll be asked for IDs and turned away,” he said. “The only exceptions are those with severe medical issues, and they must contact the county in advance (at 813-307-8063) to be picked up and taken to the Sun Dome. Reservations must be made ahead.”

That’s why it’s so important for residents to be fully informed and plan accordingly.

“Although we’ve never been hit directly by a hurricane, don’t let that lull you into a false sense of security,” Merry said. “It’s important for everyone to prepare in advance, and pay attention to television and radio weather alerts.”

“There’s a 40-percent chance we’re going to have a normal season and a 35-percent chance it’ll be above normal,” he said. “But I don’t get too excited about the projections.

“I always tell everyone to prepare for one (hurricane). That’s all it takes to ruin your day.”

Dodging Irma was a wake-up call for many.