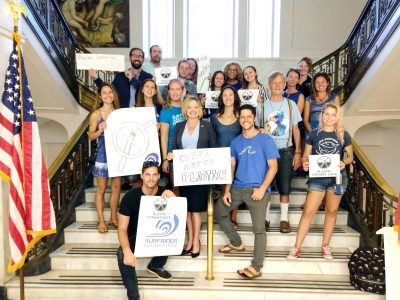 Andy Hayslip, Tampa Bay Waterkeeper, on the steps of St. Petersburg City Hall with other community partners to show support for single-use plastics regulation in the City of St. Petersburg.

A new environmental watchdog group is taking root in the Tampa Bay area and will soon begin weekly monitoring of Tampa Bay, the Alafia and Hillsborough rivers and other local water bodies for signs of pollution.

Tampa Bay Waterkeeper, an all-volunteer nonprofit organization has as its goal to bring all local water bodies to a safe level for swimming, fishing, boating and other uses.

The group went public in December 2017.

Heading the group is an environmental science and policy graduate of the University of South Florida St. Petersburg, Andrew Hayslip.

“I was doing some research and ended up interviewing some folks involved with Waterkeeper Alliance,” he said. “I was really kind of impressed with their approach to their work, by combining science and policy and advocacy to get really good things done inside their own watersheds.”

He spent his first stint as a waterkeeper for MountainTrue in Boone, N.C., where he also served as high country regional director for Watauga Riverkeeper. “That was my first job as a waterkeeper and there was no going back. The folks I was working with had worked on the Gulf and South Atlantic regions and all over the world.”

He created a watershed monitoring program on the Watauga River near where MountainTrue was responsible for getting Duke Energy to shut down a coal plant on the French Broad River due to the power company’s repeated water quality violations.

If such violations were to show up here, he said he’d have no issue going after violators, though he prefers to collaborate.

As another example of how this works, he pointed to the Puget Soundkeeper Alliance, which celebrated a big victory after proclaiming a 2,300 mile no-discharge zone for waste from boats. “Waterkeeper organizations are nimble and set up in a way that they can use the science, be the voice of their water body and hold polluters accountable in a way no one else does,” he said. 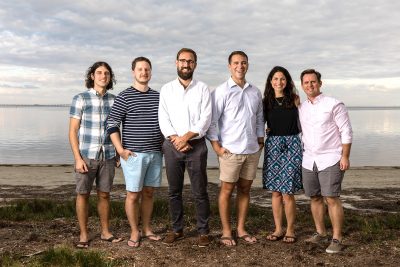 “We’ll be working with local organizations to pinpoint the sites to monitor,” Hayslip said. “We’ve been doing a lot of events with a crowdsource project, asking folks to put little dots where they like to go and play.

“The Alafia River will have at least a couple of (monitoring) sites near the mouth of the river and perhaps upstream, as well as monitoring the Little Manatee River.

“It’s important to us to focus where all the tourism dollars go. We want to make sure everything we do is stratified throughout the Tampa Bay watershed.”

Tampa Bay Waterkeeper’s coverage area includes Tampa Bay, Pinellas County beaches and north to the Anclote River, then east to the Green Swamp, which is the headwaters for the Hillsborough River.

“We have a great board of directors that helps with fundraising, communications and outreach,” Hayslip said. “Beyond that, we will rely on volunteers that will be trained to do sampling. As a science-based organization we want to make sure everything we do is of sound quality.”

“The main thing that Waterkeeper is doing that is very different is that our footprint is very large,” said board chair Lily Conrad. “Water quality monitoring and releasing this real-time data every week is the kind of information that is not available to the public.”

The public will be able to get that information using the Swim Guide app on their smart phones.

“We’re going to look at indicators for fecal bacteria from wastewater and stormwater pollution,” Hayslip said. “Ultimately, we will be looking for sources, but the first step is to expand testing already being done.

“We’ll test water quality on Wednesday, have a state-certified lab analysis Thursday and put the information in public hands on Friday. They will get an email and text alert and see what the water quality looks like.”

Hayslip said he hopes to get the monitoring started by summer.

“I’m an outdoorsman,” he said. “I want to raise my daughter swimming and playing on the water. It’s all about reconnecting folks with water resources here in Tampa Bay.”

“We are a community on both sides of the bay often defined by our water culture,” Conrad said. “Clean water is important whether you’re drinking it, swimming in it or otherwise recreating. We’re really dedicated to making sure we have clean water.”

People can donate to Tampa Bay Waterkeeper by becoming a member and actively getting involved, she said.

“The main thing is that our water quality monitoring program is citizen based,” Conrad said. “You could be an intern, a student, or someone who loves fishing and kayaking. They can go out with us to get the water sampling.”

To learn more, search for them on Facebook, or visit tampabaywaterkeeper.org.