Treasures can be found at the

In spite of its name, the Shabby Shack Flea Market is anything but shabby. 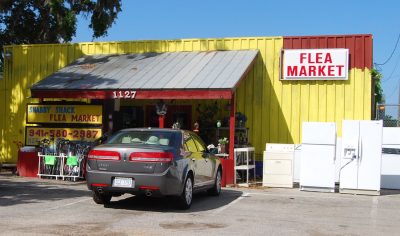 The Shabby Shack Flea Market offers space for free in front of the building for people to hold their own yard sale.
CARL MARIO NUDI PHOTOS

On the outside, the resale shop and used appliance store looks like a country general store, with an overhang covering a porch entrance, a gravel parking lot out front and used appliances lined up against a side fence.

Once inside you will notice neat rows of shelving stocked with a little bit of everything, from kitchen wares and tools to collectibles and vintage items.

The business located at 1127 36th Ave. E. in Ellenton is a shopper’s delight.

“We get about 200 to 300 customers on Saturday, our busiest day,” said owner Mark Colvin, who moved to Manatee County about five years ago to help with a family situation.

He purchased the business from the previous owner who also operated it as a resale shop.

“There’s money in junk,” Colvin said in response to the question of why he got into the resale store business.

“I was a building contractor in North Carolina and this is way more kicked back,” he said, “but there’s definitely a learning curve.”

Helping Colvin with that learning curve is his partner, Melody Besler, who moved to Ellenton five years ago, although she lived in Florida for 20 years. 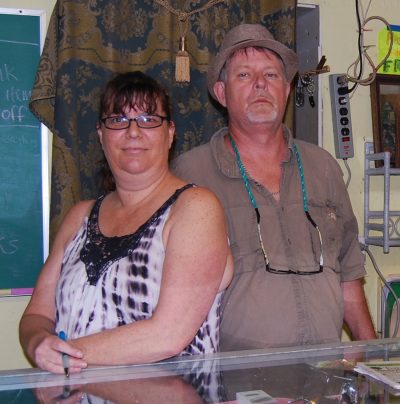 “I take care of vendor inventory paperwork and take in new vendors,” Besler said as she worked behind the glass counters with special items that are for sale. “I run the store seven days a week.”

Claire Boschetti has been a vendor at Shabby Shack from almost the beginning.

“After my husband died (in 2013) I found myself with a lot of stuff and a lot of time on my hands, so I stopped in and Mark was just starting,” Boschetti said. “I got some space and now I’m up to around 200 square feet.”

Her husband, Dave Churchill, had a business in Massachusetts and relocated it to Manatee County 28 years ago.

“We got tired of winters,” Boschetti said.

The resale business is nothing new to her though.

“I always have been a picker, since I was 6 years old,” Boschetti said. “I would pick stuff off the street and give it a good home.

“But I came from a long line of pickers — my mother and father were pickers,” she said with a smile. “It’s engineered in my genes.” 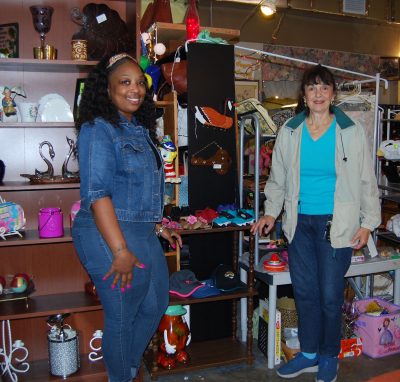 Angela Hall, left, has a booth at the Shabby Shack Flea Market she calls Shifted Crown Treasures, and Claire Boschetti, right, also has a booth she calls Claire’s Clutter.

When she was around 16 years old, Boschetti said she realized she needed an outlet to sell everything she had collected over the years.

“I started with flea markets and antique shows,” she said. “Then when I moved to Florida I just kept going.”

Although Boschetti calls her booth Claire’s Clutter, it is anything but in disarray.

She maintains a large three-ring binder of her inventory and what and where items have been sold.

And in honor of her husband, she has an area called The Guy’s Shelf, filled with tools and other mechanical items.

“This is a great place to sell your stuff,” Boschetti said of Shabby Shack.

Vendors supply their booths with items they pick up from similar venues.

Palmetto native Angela Hall, who has two booths of about 75 square feet total at Shabby Shack, said her sources are thrift stores, garage sales, church rummage sales, and purchases directly from people who know she is in the business.

Hall named her booths Shifted Crown Treasures because woman are associated with wearing a crown and she sells mostly women’s clothing and accessories, such as purses, jewelry, and shoes, in one of her booths.

“It’s gently used, but yet still good,” she said.

The other booth is stocked with a mix of items.

“You have to find out what people want,” Hall said. “They’re looking for housewares, kids stuff, clothing and kitchen ware.

Hall has been in the resale business since 2010 and with Shabby Shack for two years, but she has been collecting since she was a child.

“My grandmother is the reason I’m in the business,” she said. “She used to work for the doctors and lawyers who owned those big houses along the river in Bradenton.

“On Saturday she would have my mom pick her up, and we’d hit every garage sale and thrift store down Manatee Avenue,” Hall said. “At first it was just a hobby then I realized it’s a good business.”

She said she also sells her inventory online. 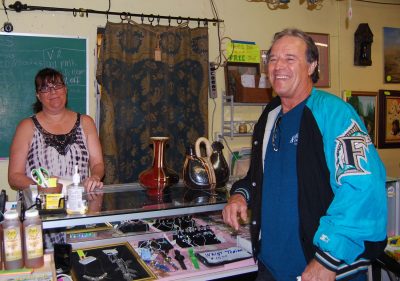 Another service Colvin offers is space in front of his store for individuals to hold a yard sale, for free.

“The best days are Friday, Saturday and Sunday,” he said, “but it’s available any day.”

And he has a perfect draw for customers to make any yard sale a success — cute little rabbits.

“We have a place up the road called the Bunny Farm,” Colvin said. “There’s rabbits, goats, chickens and turkeys.

“Most of the animals are rescue animals,” he said. “After the hurricane one person even brought us a wild baby rabbit he found.

“We also adopted two goats on their last legs,” Colvin said. “They’re now healthy and on their way back (to good health).”

They now have nine goats.

Besler also helps care for the farm animals, but caring comes natural to her.

“I came to Ellenton to help a pastor with Bible studies and to work with young girls at the church,” she said.

Colvin and Besler help out in the community also.

“We help people in need here at the store,” Besler said “We also donate items to Freedom Gathering (a community outreach program for the homeless) on 14th Street in Bradenton.” 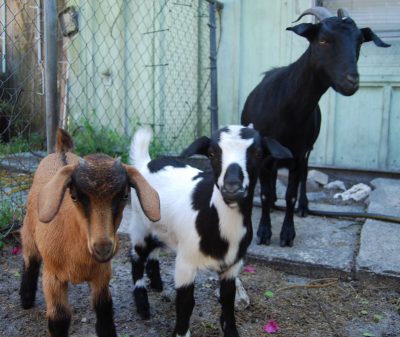 Melody Besler and Mark Colvin also own the Bunny Farm up the street from their business, Shabby Shack Flea Market, where they raise rabbits, chickens, turkeys and goats, which they also offer for sale as pets.

And the couple’s giving to the community continues in the store.

“This is almost same as church work,” Besler said. “When someone comes in to the store we don’t treat them as customers, but as family.

“I love what I do because of that,” she said.

That was one reason Ellenton resident Gil Kingree has been a regular at the Shabby Shack.

“I shop here about once a week or at least in a two-week period two to three times,” said Kingree, who moved to Manatee County from Florida’s East Coast about five years ago to be closer to his two daughters.

“I furnished my house with stuff from here for very reasonable prices,” said the semi-retired marine electrical technician. “Prices are more reasonable here as compared to other places, and the items change all the time.”

“It’s our customer service that brings them back,” Colvin said.

For more information on the Shabby Shack Flea Market, call 941-580-9131, or visit their website at www.shabbyshackfleamarket.com.

They also have a Facebook page at www. facebook.com/shabbyshackfleamarket/.