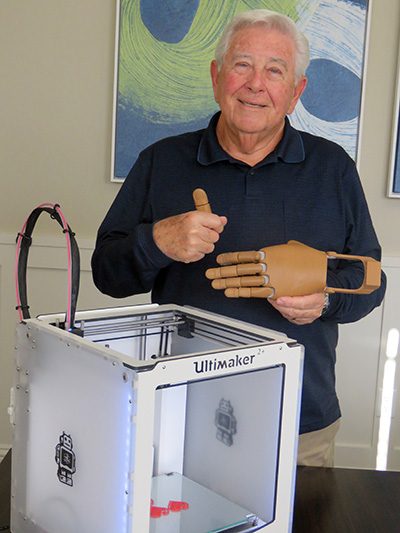 BILL HODGES PHOTO
Dr. Richard Brown, who leads the local Handling the Future chapter of the global Enabling the Future, said they are excited about creating hands for their first recipient, a St. Petersburg man. The hand Brown is holding is part of a second set created to allow Francisco Piedra to operate a keyboard.

“Giving a hand” to those in need takes on a literal meaning for Handling the Future, Inc. (HTF), the local chapter of Enabling the Future (e-NABLE), a global nonprofit organization. They use three dimensional (3D) printers to create prosthetic hands and arms for children and adults who have all-or-partial-loss of a hand either from birth or trauma. The hands are provided at no charge to recipients.

Asked where HTF finds recipients, President Richard Brown explained that referrals come from e-NABLE. That’s how they were connected last year with Francisco Piedra, 61, who lives in St. Petersburg, Fla.  Piedra’s hands and legs were amputated two years ago after he had an adverse reaction to an anti-clotting drug. Prosthetic legs and hands were estimated to cost $15,000 for legs and $100,000 for hands. That was out of reach financially since he lost insurance when he stopped working.

With the help of his physician, Dr. Luis Jovel, Piedra received legs without charge from Hanger Clinic, which offers support and prosthetic limbs. But he still had the daunting mission of finding a source for arms. Again, through Jovel’s office, they found their way to e-NABLE and subsequently to HTF, its Wimauma chapter.

Brown, a part-time Valencia Lakes resident, praises Dr. Jovel’s intern, Danielle Ayala, for invaluable assistance. When they started exploring 3D printing, her perseverance led her to the Hillsborough County Library in Tampa and the University of South Florida which allowed her to use their printers before HTF had its members trained to use the technology and purchased its own printer.

Subsequently, HTF began printing Piedra’s hands last August. Brown built Piedra’s right hand from his printer in New York, while Glenn Brown, a member of the local chapter, built the other from his printer in Wimauma. After members completed the complicated task of assembly of the various hand components, they fitted Piedra with his new hands in November.

Brown said they are careful to not set false expectations for the devices upfront. The 3D-printed hands provide a general basic grasping motion and are meant to be viewed as tools for specific functions. For example, they are working on a set for Piedra now that will allow him to operate a keyboard. When he has that capability, his former employer has a job waiting.

3D-printed hands are especially applicable for children who grow out of prosthetic devices rapidly. Brown and his group are excited about the prospect of helping a 6-year-old boy in Ruskin who was born with no arm below his elbow. They are discussing that possibility now with the family.

Enabling the Future started five years ago as a result of a carpenter in South Africa asking a stage prop creator to collaborate to make a hand to replace the fingers he had lost. Now it has 10,000 members and collaborators all over the world. The local chapter, Handling the Future, Inc., was formed in 2015 as a Valencia Lakes club and operates solely on donations; it charges nothing for its services. In April 2017, HTF applied for status as a 501(c)3 nonprofit Florida corporation. Although final approval hasn’t been received, Brown did say that any donations made after the application date of April 2017 are tax-deductible.

Want to know more about the organization? Visit them on the web at www.enabling the future.org.  For information on Handling the Future, Inc., call Brown at 914-475-2863.