Home News All aboard the North Pole Express, bound for Christmas
News

‘Parrish is growing so fast, but it managed to keep its community spirit. It doesn’t matter where you’re from — they accept you.’ 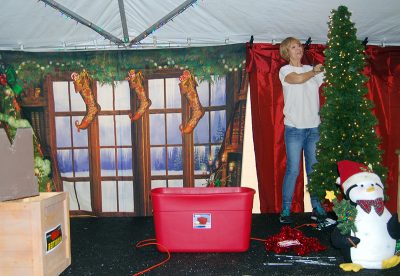 CARL MARIO NUDI PHOTOS
Karen Romant, president of the Parrish Playworks, works on the set for the play Stupendous, Spectacular Christmas Sing Off the acting troupe will be producing during the Florida Railroad Museum holiday event, North Pole Express.

Over the next three weekends thousands of children will be transported via a magical train to the North Pole to see Santa.

While on the North Pole Express, which departs from the Florida Railroad Museum, 12210 83rd St. W., Parrish, the children and their accompanying adults will be treated to Christmas carolers, surprises, a special gift of a bell, and singalongs for the 20-minute trip.

When the 500 passengers arrive at the “North Pole,” they will find the museum’s northern terminal in Willow transformed into a holiday winter wonderland.

Many visitors get in line right away to see Santa, others wander over to hear stories being read. The children get to choose the story, which many times is the popular story of a miracle Christmas, The Polar Express, by Chris Van Allsburg.

Some visitors purchase food first and sit in the large tent to see a splendidly produced 15-minute live musical review.

“Unfortunately all of the nights are sold out,” said Glenn Miley, event coordinator for Florida Railroad Museum.

The North Pole Express has been running since 2004 when there were only 700 riders, and has become one of the railroad museum’s most popular events.

“Everyone loves trains and Christmas,” Miley said. “And here you get both — you get to ride a train to the “North Pole.’”

This is the second year Parrish Playworks has produced and performed a children’s Christmas show for the museum’s North Pole Express event.

“The Parrish Playworks is a community organization with participation that is inclusive with all levels of talent,” Romant said.

The seed for a theater company was planted in 2013 when Romant started collecting stories about Parrish pioneer families.

“My friend, Claudia Hartung, asked me to help write their stories,” she said. “She loves Parrish and wanted to do something special.” 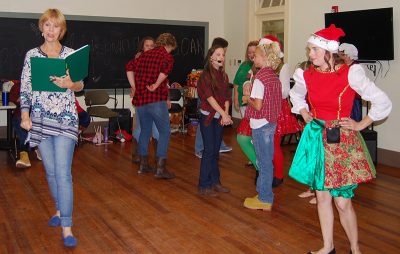 Karen Romant, president of the Parrish Playworks, directs the actors of the play Stupendous, Spectacular Christmas Sing Off during a dress rehearsal recently at the Parrish YMCA branch.

Romant started collecting the stories and that evolved into a play called Red Rooster Tales.

The preview performance by local actors was held at the Parrish YMCA and was about 20 minutes.

The audience loved it, Romant said, so the group decided to do a 90-minute production of Red Rooster Tales at Saint Francis Cabrini Catholic Church community hall.

“It was the creative team behind Red Rooster Tales that formed Parrish Playworks in 2014,” Romant said.

The Parrish Playworks has about 200 members, with a nine-member board of directors.

Each Playworks event has between 24 and 36 members participating, Romant said.

Marilyn Rivera, who lives in Plantation Rivers, was playing one of Santa’s stable hands in the Christmas play.

“Parrish Playworks gives us an opportunity to get out there,” said Rivera, a retired U.S. Army veteran who suffers from post-traumatic syndrome disorder. “I feel alive again.”

The 60-year-old was in the service for four years active and three years inactive.

She said she was the first female drill sergeant to introduce men and women into combat training together.

The New York City native moved to Florida 10 years ago and to Parrish four years ago.

“I was looking to do something,” Rivera said. “I’ve enjoyed singing since I was a child.

“I wanted to get more active in the community and saw the call for singers and actors,” she said.

Ellenton resident Madison George, 18, was picked as the chorographer for the Christmas show. She has been with Parrish Playworks for three years.

“When I was 16 I was only in dance and at the time wanted to do theater,” George said, “So when I heard about Parrish Playworks I joined.

“I like the variety of ages,” she said. “You can learn from people older and younger than you.”

Working with Parrish Playworks is very emotional for George.

“It was the first time I did any theater, and they showed me the ropes,” she said. “It’s not just an actors’ troupe. It’s like family.”

Parrish Playworks Vice President Jennifer Butler has been with the acting group from its inception.

Butler is the musical director and wrote the Christmas play, basing it on the sing-off idea in the hit movie Pitch Perfect, but with a Christmas spirit message. 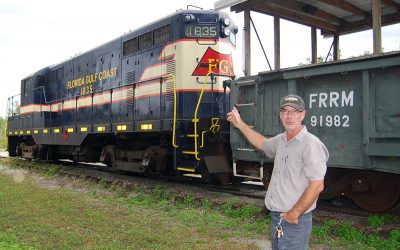 Florida Railroad Museum event coordinator Glenn Miley gives the history of the 1951 engine General Motors built for the U.S. Army, which donated it to the museum in 1993. The engine will pull the North Pole Express train during the museum’s holiday event.

“I would lie in bed awake thinking about it,” she said. “First the Christmas songs we were going to use came to me, then the story, and it developed from there.

The registered nurse moved to Manatee County with her husband of 21 years, Louis Butler, from a town south of Chicago in 2004.

They live in Harrison Ranch with their two children, a daughter, Emily, 17, who also did the makeup for the show, and a son, Joey, 15, who was a member of the crew and helped build scenery.

Butler said she writes songs and sometimes sings in her husband’s band, Brimstones.

“Parrish is growing so fast, but it managed to keep its community spirit,” she said. “It doesn’t matter where you’re from — they accept you.”

Romant said that was the reason she and her husband, Joe Romant, moved to Parrish in 1993.

She was teaching in St. Petersburg and when looking for a house they wanted something more rural, so looked in northern Manatee County.

“We fell in love with Parrish,” she said. “And it was easy to get to St. Petersburg.”

Now retired, Romant has been very active in the community and Parrish Playworks.

“One of the reasons I love doing this is because I believe in local talent,” Romant said. “I love how it pulls the community together.

“It’s so lovely to unleash all that energy,” she said.

The play, Stupendous, Spectacular, Christmas Sing- Off, conveyed  that theme of cooperation.

It is about two groups of Santa’s helpers, one the rough and tough stable hands and the other the more snobby toymakers who think they are better than the stable hands.

The chief Santa helper and his wife come up with a contest to decide which group will accompany Santa on a post-Christmas concert tour of the world.

“Everyone loves Christmas so much they don’t want the holiday to end,” said Romant, “so Santa will make a musical tour.”

In the end, both teams of helpers are surprised by the judge’s decision.

There are another nine to 10 people helping behind the scenes, including Romant’s husband, Joe.

The highlight of the evening for many of the children was their visit with Santa.

The children got to see St. Nick in an old-time train station the museum constructed. 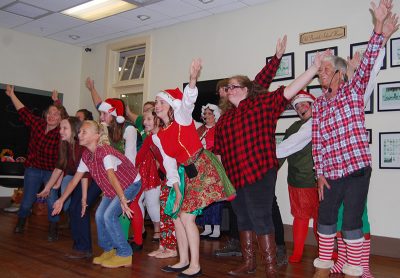 All of the actors in the Parrish Playworks production of Stupendous, Spectacular Christmas Sing Off practice the finale during a dress rehearsal recently.

Each family has a personal visit in a private room with Santa, so there are no noisy children in a line behind them anxious for their turn.

“This is probably the best visit with Santa anywhere,” Miley said.

The Parrish Playworks was planning to do a murder mystery train ride and dinner in mid-February at the railroad museum.

“We’re thrilled to be partnering with the Florida Railroad Museum,” Romant said.

“The arts are the perfect vehicle to make connections with people,” she said.

To learn more about the Florida Railroad Museum in Parrish check out its web page at www.frrm.org.