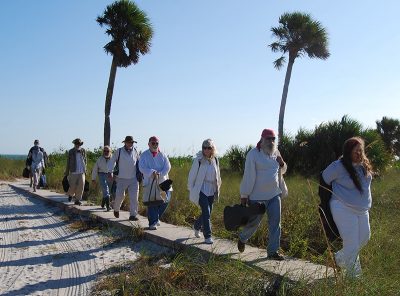 CARL MARIO NUDI PHOTO
The St. Petersburg Sea Shanties disembark from the ferry to Egmont Key on Nov. 11 ready to perform during the Egmont Key Alliance event, Discover the Island.

Egmont Key, situated at the mouth of Tampa Bay, has a long maritime history, which made the vocal group, St. Petersburg Sea Shanties, a perfect fit for the annual Discover the Island event on Nov. 11.

A lighthouse was built on the northern end of the island in 1858 and is still maintained by the United States Coast Guard as a navigational aid for ships entering the bay.

The 2-mile-long island also served as a Union Navy station during the Civil War as part of the blockade against the Confederacy.

And during the Spanish American War a hospital was maintained on the island as a quarantine site for returning troops who were suffering from yellow fever.

So when the leaders of the Egmont Key Alliance, the organization that sponsors the annual Discover the Island event, asked the  St. Petersburg Sea Shanties several years ago to perform the a capella group of seven jumped at the opportunity.

They have been giving performances during the event every year since then.

“We have gone to several maritime events, including visiting the Apalachicola Maritime Museum,” said Dennis Devine, a spokesman for the group.

Another member, Bruce Witton, lived in Ellenton for 13 years, but he recently moved to White Springs, the home of the Florida Folk Festival.

“I was singing in a barbershop quartet, and the leader of a Cortez sea shanty singing group, the Main Hatch Motley, heard me,” Witton said. “He convinced me to sing with them.”

Witton said he discovered a lot of the shanty songs were the same ones he sang in kindergarten in England.

Haley and Correa also started with the Cortez group, and seeking to broaden their experiences, joined the St. Petersburg Sea Shanties.

Correa said the Motley group joined forces with the St. Petersburg group to sing at the Cortez Commercial Fishing Festival several times “and they liked my singing and asked me to join.”

A retired masonry contractor, he moved to Florida 30 years ago from Indiana.

“I live on a 30-foot scow anchored off Cortez,” Correa said. “I love the water.” 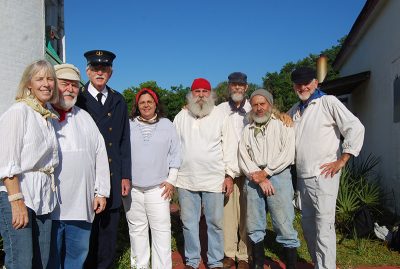 A licensed sea captain, he has Portuguese sailor and fisherman blood in his veins, according to a short biography Devine provided.

“Captain Rick has been sailing since he was 8 years old,” his biography read.

Family heritage also has great importance to Haley. His great-grandfather, Samuel Sparks Lamb, is considered the “Father of Palmetto.”

And on his mother’s side, he is a descendant of the family who owned the Fuller Steamship Line in Bradenton.

“I like the style of the music,” Haley said in response to why he joined the sea shanty singing group. “And I have a historical interest with my family’s maritime past.”

He also was a commercial crab fisherman working out of Cortez on a boat he built himself, according to his biography.

The historical significance of the sea shanties also played a role in all the other members deciding to be part of the singing group.

“I love the history of the shanty tradition,” said Witton.

Clement, the longest serving member, said the founder of the St. Petersburg Sea Shanties, Fred Seidl, researched sea shanties along the Gulf of Mexico coast and found there was a strong tradition in Florida, which was little known before then.

“He was a longtime folk singer, and I loved folk songs, and he needed to build up his group so he asked me to join,” Clement said.

Fuller, who is president of the Friends of Florida Folk organization and a U.S. Navy veteran, said he joined the St. Petersburg Sea Shanties because of the nautical history.

And Haines, who learned how to play the guitar from her father while growing up in Maine, said she joined the group because of the music and friendship.

“I just retired, and this is how I want to spend my retirement,” she said.

Haines also uses her musical talents and Scottish heritage as a member of a Tampa Bay Celtic group.

Clement said it is important to find a niche in the folk music circles for sea shanties.

Devine agreed and added that the “St. Petersburg Sea Shanties is helping to define sea shanties as a folk music genre.”

As the group sang on the front porch of the historic Guard House on Egmont Key, Karla and Justin Petraitis, of Palmetto, sat and enjoyed hearing the harmony and rhythm.

“The songs were very interesting and told a story,” Kara Petraitis said.

Justin Petraitis, a professional musician himself, said he really enjoyed the group.

“I like to experience different types of music and this is the first time I heard sea shanties sung,” he said.

This was the couple’s first visit to the island.

“We’ve been wanting to see Egmont Key, and then we read about the festival so we decided to come today,” Karla Petraitis said. 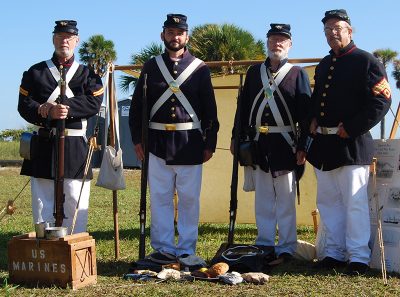 The Discover the Island event was held on Nov. 11 and Nov. 12 as a fundraiser for the Egmont Key Alliance, a nonprofit formed to support the state park goals.

“We work with the Florida Park Service and help fund projects they can’t do,” said Richard Sanchez, president of the Egmont Key Alliance for the last seven years.

Founded in 1991, the alliance is made up of several interest groups that were working to preserve the unique state park.

“One was working to preserve the lighthouse, another was protecting the birds and wildlife, and the other one was promoting the history of the island,” Sanchez said.

“We thought we could work better together as an ‘alliance,’” he said.

It was during one of the previous Discover the Island events that sparked Sanchez’ interest in the organization.

“I saw all the amazing things they were doing for Egmont Key,” he said, “and I’m a history buff and that’s what got me started.”

For more information on the St. Petersburg Sea Shanties and to find out where they will be performing next, visit their website at ww.stpeteshanties.com.

To learn more about the Egmont Key Alliance go to www.egmontkey.info.

More information about Egmont Key State Park can be found at www.floridastateparks.org/park/Egmont-Key.

And find out more about Justin Petraitis and his original music at www.justinthomasmusic.com.