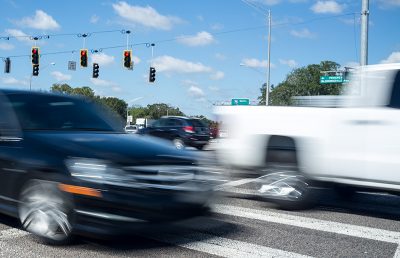 MITCH TRAPHAGEN PHOTO
Traffic on major east-west thoroughfares, from Brandon south to Sun City Center has increased exponentially over the past several years. Solutions are being sought for roads such as Bloomingdale Blvd., above, without having a negative impact on the businesses the line the heavily-traveled road.

Over the past 30 years or so, traffic congestion in the Brandon area has reached a crescendo. Or, has it? Actually, regional planners say, it will only get worse if something isn’t done to break up the gridlock on major east-west corridors.

They conceded during a community meeting Oct. 30, though, that reversible lanes on Bloomingdale Avenue — an idea that has baffled and irritated a lot of local commuters — may not be the best idea for loosening the log jam. And for that, they received rousing applause from the crowd of about 200.

The Hillsborough County Planning Commission staff presented the most recent version of its Brandon Corridors and Mixed-Use Centers Pilot Project during the community meeting at The Regent. It looks at transportation issues, including the potential addition of Bus Rapid Transit corridors to help alleviate traffic congestion, as well as how best to develop or redevelop parcels in Brandon to make them more connective.

One of the major messages the HCPC staff took home with them is that Brandon area residents want to protect their small businesses, which means no barriers to access along the region’s major roadways. But residents also want to see plans actually come to fruition to make the commute to and from downtown Tampa easier and to continue to host people from around the region who want to shop in the area.

The Brandon region is home to 16 percent of Hillsborough County’s retail space, but only 8 percent of its population, meaning a lot of people from other areas are adding to the congestion when they come to Brandon to shop, said co-project manager Jay Collins.

One way to alleviate the issue is to consider more intersection and turn lane improvements, instead of reversible lanes, said co-project manager Sarah McKinley. The planning commission staff mentioned extended right turn lanes as one alternative, as well as widening Lumsden Road. 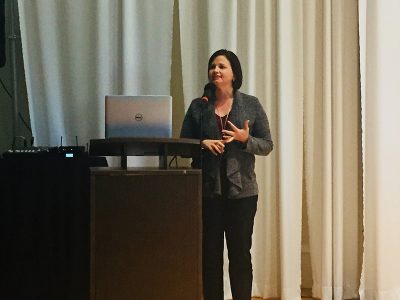 YVETTE C. HAMMETT PHOTO
Planning Commission Executive Director Melissa Zornita addresses a crowd of about 200 on a plan that lays out some initial ideas for reducing gridlock on Brandon’s east-west corridors.

Traffic is also a major concern at U.S. 301 and Bloomingdale Avenue, she said. There have been discussions with the Florida Department of Transportation about its planned enhancements, which includes widening the on-ramp for I-75 to allow for two right-turn lanes with direct access to the interstate, she said. There are also improvements planned for S.R. 60 and I-75, McKinley noted.

“The results are not intended to mean something is going to be built right away,” said HCPC Executive Director Melissa Zornita. The report will go to the HCPC Dec. 11.

Collins called the pilot project “a unique project” in that we are leveraging as much as we can throughout various government agencies. It’s unique to Hillsborough County and something the planning commission staff hopes can be replicated in other areas with similar issues.

This is what Collins referred to as an entry level study. “It gets you going to some place. What we are talking about isn’t the end of a journey, but the beginning of one. When you remodel your house, you come up with a conceptual idea, then get a general contractor, structural engineer and other professionals to perfect the idea,” he said, noting that there are second and third phases planned for this project.

“We want to redevelop so quality of life is not impacted by choices of tomorrow,” Collins said.

No doubt, this will be a costly project, McKinley said.

The report, prepared by the planning commission staff in conjunction with the Metropolitan Planning Organization, Hillsborough County and the Florida Department of Transportation, does not include any funding. That would require further approvals, Collins said.

For more details about the Brandon Corridors and Mixed-Use Centers Pilot Project at www.planhillsborough.org/brandon-corridor-mixed-use-centers.