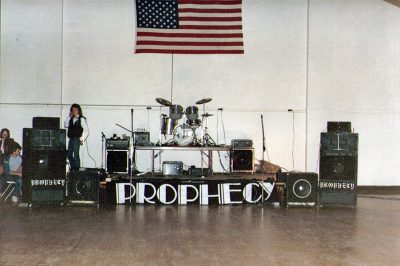 Playing in a band and being on stage was everything to my best friend. Today I can only have faith that he’s on a stage somewhere with Tom Petty. This stage certainly isn’t celestial, it’s in some small town in South Dakota decades ago. But at the time, it was good enough. Actually, it was great.

Young people, at least those with the good fortune of good health, as most have, are immortal. It usually takes something traumatic or, usually age, to learn that life really isn’t forever.

My Dad died when I was 15. He was only 43. I learned the mortality lesson the hard way. But it took something completely unrelated for it to fully sink in: My mortality became certain on the day that Johnny Carson died. I’d never met Mr. Carson but I grew up watching him. He had such grace, such humor…he seemed larger than life itself. When he passed away, some of the last of my innocence went with him, I think. I began to look around at those whom I admired and realized that someday, all of them would die. And so would I.

There is no possible way to rationalize the horror of what happened in Las Vegas this week. Pundits, analysts, law enforcement professionals have much more knowledge about such things — I can’t add to their words. Except to acknowledge that perhaps what is most terrifying is that it could have happened anywhere, to anyone.

As I watched the coverage unfold from my office at the newspaper, with numbers of casualties growing ever higher, I saw a message come through that Tom Petty had suffered cardiac arrest and was unresponsive. He passed away later on Monday night.

I’ve been a Tom Petty fan since I was a kid in the 1970s. He was a Florida boy who made good. And he did a lot of good — from making music to standing up for his fans to keep the price of his records down (when MCA Records decided to raise the price of one album to a then stratospheric price of $9.98, he threatened to rename that album, “The $8.98 Album.” He won that battle).

In addition to his incredible musical talent, where again, others are far better at critiquing than me, he possessed something that I’ve longed to have: the ability to say so much with so few words. His lyrics carried a punch like few other songwriters could throw.

And he remained true to the music. In an age when albums technically no longer exist and any number of industry publications have long-since declared rock-n-roll to be dead, Tom Petty rocked on.

In my looking around at those I admired all those years ago, I never expected that Tom Petty would be among them. Yes, he was obviously mortal but, like Johnny Carson, losing him carried an impact. This time, however, I prefer to not look around to tally up who could go next. That’s really no way to live.

People who put words to ink hoping that others will read those words are at least supposed to be smart enough to make sense of events in life. Apparently, I’m not. I can’t make sense of the unimaginable tragedy in Las Vegas. With technology today, we can all hear the cries, the terror…and we can all see the selflessness and courage that so many displayed to save others, often strangers. But if there is a lesson in that, it sure as hell was a costly one. That price was just too steep.

We can look around and think about those we have lost in our lives. They aren’t there anymore. Yet we somehow remain. It can get hard to reconcile and it’s easy to have faith shaken. Two years ago, I lost my best friend of a half century. We played in a rock band together. For today I’m going to have faith that he’s on a stage somewhere, Tom Petty is there, Dan Fogelberg and any number of others are there, too. And in the crowd as the lights come up on the stage, 58 people recently having been in Las Vegas, look up, they see the lights, and they smile as Tom Petty’s voice booms through majestic speakers. As the guitars, drums, bass and keyboards kick in, my friend, Tom and all of the others on stage look at each other and they smile, too.