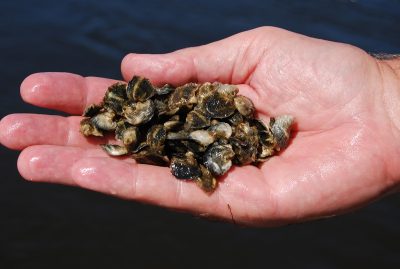 There are three major estuaries from Pinellas County to Charlotte County flowing into the Gulf of Mexico and a local organization is working to make shellfish aquaculture in those estuaries a sustainable business.

“The Gulf Coast from Tampa Bay to Port Charlotte offers a unique environment for a diversity of bivalve species,” said Curtis Hemmel, one of the founders of Gulf Shellfish Institute, Inc., which has an office at Port Manatee.

The estuaries flowing into the gulf provide the proper salinity and nutrients for successful growing of bivalve shellfish, such as clams, oysters and scallops, said Hemmel, who started his bivalve hatchery business, Bay Shellfish Company on Terra Ceia Island, more than 20 years ago.

“Over the 20 years I had more questions than answers in trying to grow shellfish,” he said. “I raised various species of clams, oysters, scallops from eggs to seeds.”

Hemmel said his focus during the last several years was production of bivalves for research, restoration, and commercial production.

With that on his mind and meeting Ed Chiles, owner of the Chiles Restaurant Group, Hemmel came to the conclusion that these can best be accomplished with an organization focusing on those issues.

“Curt started to talk about an institute to promote best practices in the shellfish aquaculture industry,” Chiles said, “and to bring businesses around it, and to promote (commercial farming of shellfish as a sustainable product).

Hemmel had worked with marine scientist Bruce Barber on aquaculture projects and when he and Chiles began putting together the plans for the Gulf Shellfish Institute, Barber was the natural choice for executive director of the nonprofit organization.

“Curt saw a need and he made a proposal to me,” said Barber, who has a doctorate in marine sciences from University of South Florida. 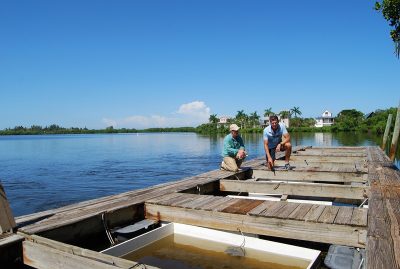 “I always look for different solutions to solve problems in the industry,” Hemmel said. “And I always gravitate toward the academic side of bivalve cultivation (for answers). I knew there were answers.”

Started in 2015, Gulf Shellfish Institute has already been involved in two research projects, one on sunray venus clam reproduction, and the other on using native clams to promote seagrass growth.

“Our mission is to support and promote the increased production of shellfish,” Barber said.

According to a 2013 United States Department of Commerce report, 91 percent of the seafood consumed in the United States is imported from other countries, creating a seafood trade deficit of over $11 billion.

“Clearly, there is a tremendous economic opportunity for us to increase the production of locally grown, sustainably produced, high-quality seafood,” Barber said.

“We have to get into the game of aquaculture,” said the restaurateur. “Our area is uniquely suited for this with the three estuary systems,” he said. “We need to be competitive in aquaculture yet be safe with the environment.”

Chiles, whose waterfront restaurant group includes the Sandbar Restaurant in Anna Maria, The Beach House in Bradenton Beach and the Mar Vista Dockside Restaurant and Pub on Longboat Key, said local aquaculture farms are important to him because restaurants are the end users of the products.

“Owners who want great seafood in their restaurants will look for the best product,” he said. “We want to support local producers because the product is better and fresher.”

Chiles pointed out that the area’s local history has been seafood oriented from the indigenous peoples who gathered shellfish for sustenance, to the Cuban fishermen, to the settlers of Cortez.

“In order to keep doing this we need to maintain a sustainable stock,” he said. “We have to make sure we manage it well.”

This was where the Gulf Shellfish Institute comes into play, Hemmel said.

“If we can help the (shellfish) farmers, who are my customers, grow then we both benefit,” he said.

According to the University of Florida’s Institute of Food and Agricultural Sciences the clam farming industry has about 250 operations on 1,500 acres of submerged lands where immature clam seed is raised to a marketable size.

Clam farming has three consecutive biological or cultural components — production of small larvae or seed in a hatchery, the raising of that seed to a juvenile in a land-based nursery, and growout to maturity from the larger seed in open water. 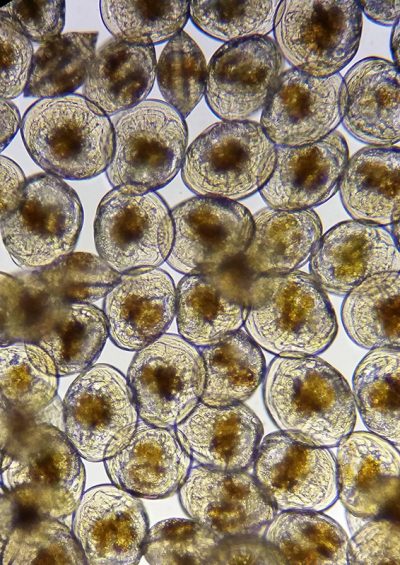 PROVIDED PHOTO
The clam larvae pictured above will be grown into seeds at Bay Shellfish Company on Terra Ceia Island for aquaculture farmers to raise as marketable mature clams.

The institute plays a part in the need to increase local production of seafood sustainability, Barber said.

Working with Port Manatee, the institute planted 600,000 native clam seeds in Tampa Bay off the shores of the port.

“The feeding action of the clams cleans the water and produces sediment from its bodily wastes, which creates a positive environment for seagrass to grow,” Barber said.

“It’s very successful,” Hemmel said. “This is a shining example of how the institute is unique.”

“The institute is independent and more flexible,” Barber said. “We can serve as a conduit to bring together the participants.”

As the institute grows and acquires more funding, there are plans to research how to address red tide.

“We will focus on the issue of red tide impact on shellfish production,” Barber said.

For more information about the Gulf Shellfish Institute visit its website at www.gulfshellfishinstitute.org.

To learn more about the Bay Shellfish Company check out its website at www.bayshellfish.com.

Information on the Chiles Restaurant Group can be found at www.groupersandwich.com.