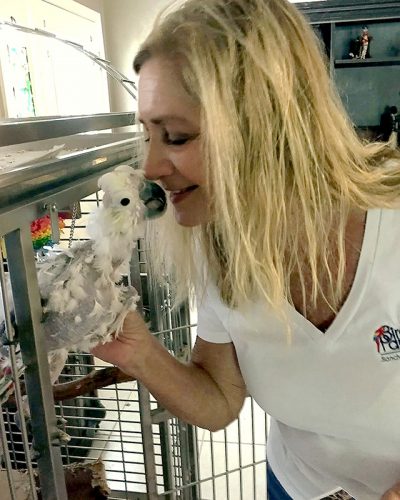 LOIS KINDLE PHOTO
Birds of Paradise Sanctuary & Rescue founder Debbie Huckaby shares a tender moment with PP, a yellow and white sulphur-crested cockatoo who came to her a broken soul. The bird had been chronically abused by a former owner and developed the self-destructive habit of plucking her own feathers.

PP, once a beautiful yellow and white sulphur-crested cockatoo, came to Birds of Paradise Sanctuary & Rescue a broken soul. She had been chronically abused by a former owner and developed the self-destructive habit of plucking her own feathers.

Now properly nourished and living inside a spacious cage with toys to stimulate her, she has found peace and security inside the countryside home of Birds of Paradise founder Debbie Huckaby. Twenty-two special-needs birds like PP live in the home.

“We have more than 300 others who live in flock environments on the property in large aviaries of 10 to 25 birds,” said Huckaby, 58. “This is a forever placement facility. All but about 10 percent will live here until they die.”

Some of the birds, like those with special needs, come from abusive or neglectful homes. Most, however, were surrendered due to life-changing events like a death in the family or move to a nursing home or a no-birds-allowed apartment. Sometimes the owner simply lost interest in caring for the bird or was no longer physically able to do so.

Still others simply wanted their birds to live in a better environment, Huckaby said.

“We have birds living here whose owners come and visit every week,” she continued, “and a Moluccan cockatoo named Aquiel who does a sleepover once a month (at her former home).

Huckaby moved with three parrots from her native Tennessee almost 10 years ago after a divorce and became a foster home for birds for the home-based, Florida Parrot Rescue.

One of the birds she fostered was a self-mutilating umbrella cockatoo named Charlie who she adopted as a personal pet.

“When I got him, I was simply a volunteer,” Huckaby said. “But after working with him and learning more about his needs, I realized most birds don’t belong in homes.” 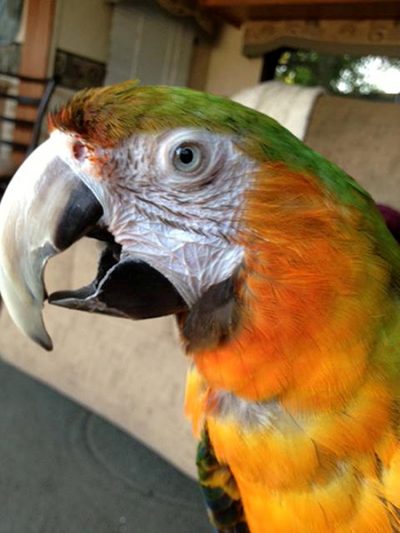 BIRDS OF PARADISE SANCTUARY & RESCUE PHOTO
Beauties like this chicken harlequin macaw is among the lifelong residents at Birds of Paradise Sanctuary & Rescue. More then two dozen volunteers from a five-county area help founder Debbie Huckaby feed the birds and promote the sanctuary at area events.

That was the impetus for Huckaby to start Birds of Paradise Sanctuary & Rescue in 2011 in Palmetto. It began with her taking in 16 macaws, cockatoos and an Indian ring-necked parakeet after seeing a Facebook post from an ill breeder in Ohio.

“It mushroomed from there,” Huckaby said.

Three years ago, the sanctuary needed more space and was moved to a 6.5-acre former tree farm at 17020 Waterline Road, Bradenton. Visitors are welcome by appointment only.

Since then, Huckaby has given shelter to birds from rescues in Mims, Orlando and Myaaka City that closed due to lack of funding and volunteers. She’s rescued birds once living in roadside circuses, abandoned in homes and brought to her by animal control agencies, a bird mauled by a dog and babies disturbed in their nests by construction activities. They come from other states, as well as individuals.

Two months ago, Huckaby rescued a blind, 73-year-old cockatoo that had been living in a small dog crate, without even enough room to spread its wings. There were no toys, only one concrete perch and a bowl for water and pellets.

Since coming to Birds of Paradise Sanctuary & Rescue, the bird has flourished in a spacious cage, with toys to stimulate her and food like fresh fruits mixed with veggies.

Birds of Paradise Sanctuary & Rescue is staffed entirely by 25 volunteers who live in Sarasota, Manatee, Hillsborough and Pinellas counties. They represent the 501(c)3 nonprofit at area events and help Huckaby feed the birds at the sanctuary.

Its operation relies 100 percent on donations and through “begging and borrowing,” as Huckaby puts it. “We have a wonderful group of supporters and 12,000 followers on Facebook.”

Birds of Paradise Sanctuary & Rescue has an avian-therapy program in place to help PTSD veterans and others suffering from anxiety disorders, kids with cancer, residents of nursing homes and special-needs kids in area schools. 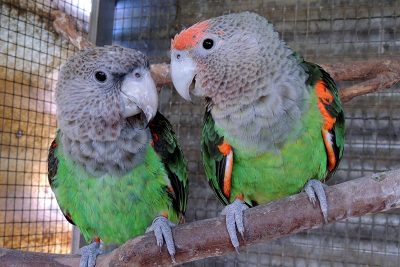 BIRDS OF PARADISE SANCTUARY & RESCUE PHOTO
A pair of Quaker parrots socialize in a Birds of Paradise aviary. The sanctuary in Bradenton needs additional donations to construct new aviaries for its future permanent residents. Many of the larger birds live four to nine decades.

Its Huckaby’s way of giving back to the community that supports her.

People often ask her why she does this kind of work.

“I don’t know, I just do,” Huckaby tells them. “I believe I was meant to do this. The birds hold a special place in my heart. They speak to my soul.”

To make a tax-deductible donation for food, additional aviaries to shelter more birds, veterinary care and community outreach or to become a sponsor or volunteer, visit www.birdsofparadisesanctuary.com, Birds of Paradise Sanctuary & Rescue Inc. on Facebook or call 727-366-9997.