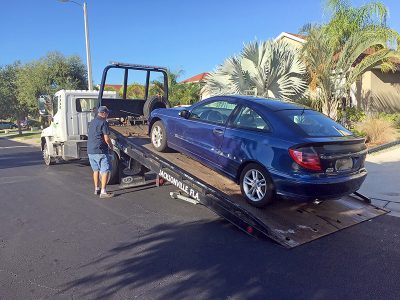 Somewhere in a South Hillsborough community is a very dishonest young man. He backed into my wife’s car at a pretty good rate of speed, hitting right along the driver’s door. He left no skid marks from trying to stop — the only thing that stopped him was her car. And she suddenly had an up close and personal view of his taillight. He pulled forward so she could get out of the car, and he then apologized, telling her it was his fault and that he simply didn’t see her.

The accident occurred in a grocery store parking lot, which is private property. The Hillsborough County Sheriff’s Office doesn’t take accident reports on private property. Which is too bad because the photos Michelle took at the scene are pretty graphic in showing that, indeed, the young man was at fault. She was on the far side of a traffic lane — he had nearly the entire lane to back up. A deputy would have recognized it in an instant: Someone backing up too fast without looking.

Unfortunately, the grocery store had no video surveillance cameras, and the young man changed the story when he contacted his insurance company. He claimed my wife was at fault. Although the photos she sent into the insurance company show otherwise, the entire episode turned into a “He Said — She Said” event. Even with evidence to the contrary, he refused, as did his insurance company, to admit fault. His insurance company’s stance? “Sue us.” Yeah, like we could sue a company with a million attorneys on staff.

So, our insurance company covered it. My wife went to the grocery store, did nothing wrong, and it ended up costing a few thousand dollars, after the deductible and having to buy a new (to us) car. It also cost hours on the phone and hours in having the car evaluated. In the end, it turned out the young man was backing up fast enough to have totaled my wife’s car. That created an immediate problem: For working couples in the Tampa Bay Area, two cars are a necessity.

In looking at the photos Michelle took, I noticed that the young man, despite a Florida driver’s license, had out-of-state plates.

I’m what a Florida-born person would call a “Yankee.” Yes, that’s right, I even wear a New York Yankees’ baseball cap around the house. I was born in Washington state and grew up in Minnesota. You can’t get much more northern than that.

At the same time, I’ve spent more of my life in Florida than I have anywhere else. And I can tell you this: Florida today is not the Florida that I moved to back in 1994.

We’ve left a few times — once I started my own newspaper in Iowa. It was a lot of work, but things went well. At least until the economy crashed at the end of 2008. In some ways, it was for the best: About that time my doctor told me I would be dead in a few months if I tried to keep up the pace. It hurt to tell my one full-time employee, a very talented writer, that we wouldn’t be continuing our mission into 2009. And it was a mission — I think we actually helped the small town we served.

We moved to the New York City area twice. I still love New York and I miss living there. But I’ve also realized something: Tampa and New York City have a few things in common. I’ve always said that New York is an enormous city that is made up from a whole bunch of small towns. The Upper East and West Sides, Chelsea, Greenwich Village, the East Village, the West Village — they are communities.

The Tampa Bay Area is much the same. It’s a metro of nearly 4 million people, largely made from a cluster of small towns,  although few really are towns.

If you’ve recently moved here you may be surprised to know that Apollo Beach, Ruskin, Sun City Center, Riverview and even Brandon are not actually towns at all — they are just places on a map in an area known as “Unincorporated Hillsborough County.” But for the folks living in each, they tend to function as towns. People get together and try to make their communities better.

But sometimes, those of us who come from somewhere else assume far too much about our adopted homes, often to the dismay and frustration of Florida natives. Florida will never be Michigan, New Jersey or New York. For the most part, people shouldn’t try to make things work like they did “back home.” I (and many others) often refer to Florida as “paradise” and, after hearing from a good friend and Florida native, that’s really not correct. Florida is just a place, and it has its positives and its negatives just like any other state. If you moved here expecting paradise, you may well be disappointed. Like everywhere else, life simply happens in Florida.

Florida natives may be an endangered species but of those I know, they are among the best people I know. Change is inevitable, particularly in a place like Florida, but there’s no harm in appreciating that not all natives like what is happening to their state. There is no harm in understanding.

And yes, most certainly people from “somewhere else” are good people, too. I know of many who give of themselves to help save the very idea of paradise, ranging from nature to people in need.

But still, it wasn’t much of a surprise that the young man who crashed into my wife’s life, and then lied about it, had out-of-state plates. I suspect a lot of people end up in Florida because it’s both the figurative and literal end of the road. So, with him, too, I’m trying to be understanding. It seems as people crowd into this place, being understanding may well be the best that we can be.