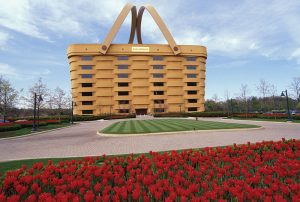 The landmark Longaberger Headquarters, known as the “Big Basket,” will no longer house any employees as the company consolidates this month.

One of Marge Weber’s fondest memories as a long-time Longaberger Basket collector was visiting the famous company headquarters in Newark, Ohio, universally known as “The Big Basket.”

Seven stories tall and 180,000 feet square, “The building was amazing to see,” said Weber, who now resides in Sun City Center. “It was shaped like an enormous basket, and they were saying that a small plane could actually fly between the handles.”

By the end of this month, however, the Longaberger company will empty the famous Basket Building, relocating the last of their employees to the factory in Frazeysburg, where the company’s basket weavers and distributors work. Longaberger Chairman John Rochon Jr. announced that the “Big Basket” would be vacated in time for the the annual Longaberger Bee, scheduled to be held July 21 through 23 at the Homestead in nearby Dresden. 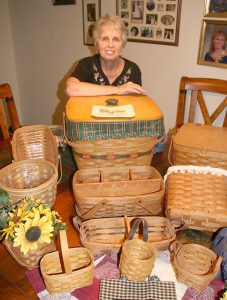 Marge Weber of Sun City Center shows off her collection of Longaberger Baskets, which are all dated and signed by their maker. Her latest addition was a gift she received on March 30th, her birthday. LISA STARK PHOTOS

“It’s sad that’s its closing,” said Weber. “It’s such a unique building and so specialized — who is going to buy it?” In 1997, Weber traveled on a bus with fellow collectors from her hometown in Harford County, Md., excited to view the newly opened 9,000-ton Basket Building.

The “Big Basket” was the dream child of founder Dave Longaberger, who spent years developing the concept for the $32 million, seven-story replica of the company’s Medium Market Basket. The building was completed in 1997 and eventually housed 500 workers in the glory days of the Longaberger Basket Company. The now iconic building features a 30,000-square foot atrium with natural light from the skylight to the lobby floor, two 75-ton heated handles, a large cafeteria area, a 120-seat theater with stage, 84 windows and 31 restrooms.

This month, as the remaining few office workers finally move out of the “Big Basket,” Longaberger basket collectors all over the U.S. lament the departure of the treasured landmark. It’s really a shame,” said local Longaberger basket collector Nina Miles, from Delaware, Ohio. “That building is such a treasure. I hope they figure out what to do with it.” Asked if she thinks the closing of the building will affect the value of her basket collection, Miles remarked: “No, not really. The factory will still make the baskets, and as long as they continue to make a quality product, they will still be in demand.”

“The Big Basket will always be a permanent advertisement for the Longaberger Company and a symbol of our community’s basketmaking heritage,” said Russell R. Mack, executive vice president for communication at Longaberger parent JRJR Networks. “People will continue to come to our area to see the famous basket and take pictures of it.”

Unfortunately, The Longaberger company has struggled since the death of company founder Dave Longaberger in 1999. A combination of bad economic times and changing home décor tastes sent sales from a peak of $1 billion in 2000 to about $100 million in 2014. Part of the reason for the decline, said some, was that competition started making baskets more cheaply and faster in China. Several rounds of layoffs subsequently occurred, and a mounting property tax debt and other financial problems ultimately forced the closure of the “Big Basket.”

The son and grandson of basket weavers, Dave Longaberger grew up in the little town of Dresden, about 25 miles northeast of Newark, in a house with three bedrooms, one bathroom and 12 children, all schooled in basket weaving by their father, J. W. Longaberger, who made baskets for local potters and farmers.

The Longaberger empire arose out of Dave’s vision of producing quality baskets and selling them through direct sales consultants, much like the Fuller-Brush salesmen who were so successful at that time. People from all over the world began falling in love with the well-crafted baskets, and made pilgrimages to Dresden, which was turned into a tourist town complete with Longaberger restaurants, shops and even a museum.

Weber recalls how she arrived in Dresden in 1997, and was immediately taken in by the quaint, personal charm of the place. “We actually met the company founder, Dave Longaberger, and got to have dinner with his family,” said Weber. “I bought a basket that was signed by Dave’s mother, Bonnie. ”

A man who was driven by his own creative vision, Dave Longaberger moved his basket-making operations a few miles down the road to Frazeysburg once they outgrew the town of Dresden. He eventually drove his company to multi-million dollar sales, and realized his dream of building the Big Basket Building, which many said could never be done. Today, An estimated 500,000 tourists still visit the area each year.

The move from the “Big Basket” marks both an ending and a new beginning for the company, say company leaders. It will bring all of their workers together in one spot, instead of having employees scattered between the factory, the Homestead at Dresden, and the Big Basket headquarters miles away.

“This brings Longaberger back to its roots and core strength,” said a spokesman for the company. “It will make it easier for all work groups to interact with each other and feel even more like a true family.”

Longaberger officials have long said that its greatest strength is its army of direct-sales consultants, and this will not change. The company has approximately 45,000 independent distributors (called Home Consultants) in the United States who sell Longaberger products directly to customers.

Newark city officials have discussed what will become of the “Big Basket” after Longaberger leaves, but no solutions have yet emerged on what to do with the building or on how to deal with the huge delinquent tax debt attached to it, something that has become a financial headache for Newark taxpayers.

“The building served us well and was a great testament to the vision of our founder,” said Brenton Baker, director of marketing and communications for Longaberger. “I don’t think of it as an end of an era, but the start of a new chapter.”