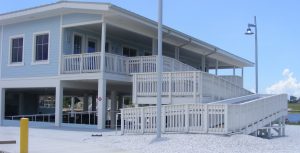 The first people to enjoy summer day camps at the Suncoast Youth Conservation Center built on Tampa Electric Company grounds in Apollo Beach are youth between the 4th and 8th grades.

Education Specialist Samantha Teehan said they have been kayaking, walking nature trails and learning about the local wildlife.

Different camps that are going on this summer around the area bring their campers to spend the day and learn about the natural environment, kayak, see native flora and fauna and talk about improving the Earth and all its living creatures.

Cherie Jacobs, TECO publicist, in a previous interview had said that all camps would be pre-registered, and as it turned out, every spot was filled before the center even opened 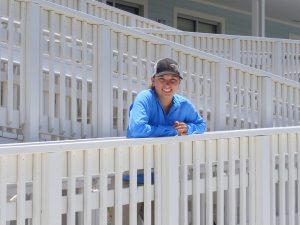 While walking some of the 500-acre grounds June 29, I took photographs of what has already been built and some of the area where new things are expected soon.

“That’s where the kayak launch is going to be,” Teehan said, pointing to a grassy area near a stream leading out to a small lake, just northwest of the main blue-and white building.

She also identified the potential location of many other things next year’s summer campers will get to enjoy.

Youth from local camps come for the day; some once a week and some more, she said. 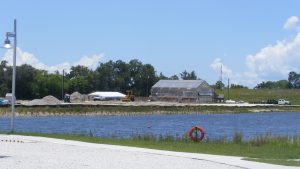 Kathy Guindon, director of the Suncoast Youth Conservation Center where the program is being held, said the building finished on target in the spring and is being used for office space and classrooms, but most of the time the youth are in class, it’s in a space under the stilted blue building in a cool space where even on an extremely hot day, the breeze never seemed to stop. People driving by can identify this building from the highway in front of the Manatee Viewing Center, as it is two-story, and on columns with an open classroom under it.

No other buildings except a large greenhouse across the lake from the main building are yet built on the site, but many things are under way.

Jacobs explained that TECO donated the 500 acres for the “Florida Conservation & Technology Center” to give something back to the community that would encourage education about the environment.

The center was planned several years ago and has many partners.

In 1986, TECO opened the Manatee Viewing Center where people can come (without cost) during the colder months and watch manatees that gather in the warm waters that discharge from the Big Bend Power Plant.

Then in 2012, plans were announced that a three-way partnership between TECO, the Florida Aquarium and the Florida Fish & Wildlife Commission would provide a place for people to come to learn about native plants, animals and other environmental details.

Long before any programs opened to the public, the University of Florida had two Ph.D. professors on site, Dr. Mark Flint and Dr. Joshua Patterson. They also worked with graduate students at the site.

“From a research perspective, this site is to be an open campus where scientists from various places can work on conservation-related issues,” Patterson said in a previous interview.

It will eventually house hatcheries, a sea turtle hospital and more.

Jacobs said this should be completed sometime in 2017.

Stanley Kroh, manager of TECO’s Land & Stewardship Programs, said the entire project is slated to be finished in three to five years and will produce both paid jobs and volunteer opportunities.