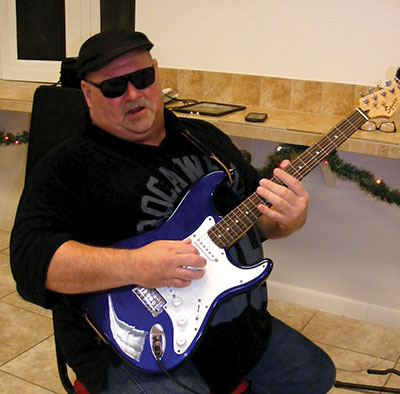 Marc Chase demonstrates his ability to slide from rock to pop to blues. The singer/songwriter is being commissioned to write a song for the American Ideals Foundation, based in Ruskin, that helps veterans and their families. Penny Fletcher photo.

When Robert Moffa heard the music of singer/songwriter Marc Chase, he knew he’d found the right person to write a song that would embody the meaning of releasing butterflies.

A composer himself, Moffa, a Ruskin resident, is the founder of the American Ideals Foundation Inc., a nonprofit 501(c)3 that helps veterans and their families. As part of military celebrations and funerals, the foundation releases hundreds of butterflies to symbolize new life, new beginnings and new love.

By chance, Chase met Moffa through a mutual friend, author Larry Whittler, and heard a story about how the freed butterflies often fly back and land on the fingers of Donna Ashley, the woman who dresses as a butterfly and releases them.

“When I heard how she holds her fingers, making a circle, thumb to forefinger, symbolizing undying love, and they come back and land on them, it gave me chills,” Chase said.

Now Chase is being commissioned to write about it, said Moffa.

This project fits right in with two other of Moffa’s interests, the foundation’s Art Project that helps artists and musicians, and Moffa’s business, R.A.M. Publishing House Inc., based in Ruskin.

“He’s the right person with the right sound,” said Moffa.

Chase, who recently attended an event in Sun City Center to honor another artist connected to  the foundation, has been playing guitar and writing songs since he was 13 and performs everything  from rock to pop to oldies and blues.

Heavily influenced by his mother, father and grandfather, all of whom were musicians, he is completely self-taught, feeling the music he creates in his head and heart instead of reading it on paper.

Although he performs many longtime favorites from several generations, Chase has written almost 60 of his own songs and has a band of seven musicians, all of whom live in different parts of the country and come together to practice and perform.

“Mom played guitar and sang to us when we were growing up in Maine,” Chase said. “My dad’s father played banjo, guitar and piano.”

Chase and his two brothers formed a band and played during their school years and by the age of 16, he had written his first song, “The Woman is a Lady.”

He continued to play for the first years he and his wife Buffy were married, traveling and living on the road and staying in the hotels where he was booked.

Chase and his brothers were picked up by Charlie Feathers, referred to in the music business as the Rock-a-Billy-King, while Chase was recording at American Sound Studios in Memphis, where he had moved from Maine. This led to five years of road performances with Feathers’ son, Bubba Feathers and the Big City Band, during which he shared the stage with Jerry Lee Lewis, Charlie Rich, Dottie West and many more household names.

“When my oldest daughter was 5, my mother asked what we were going to do about school,” Chase said. “As musicians, we didn’t think about anything like that. But Mom did, and she and Dad rented a truck and we moved to Florida near them and became ‘domiciled.’  I didn’t even know what it meant to be ‘domiciled,’ but Mom said we had to be to put our kids in school.”

Now 58, he and Buffy have since become the parents of eight children.

Coming to Florida was a natural for him as his parents had moved to Largo, and now he not only goes on the road to meet up with his band for large events, but performs at many places in the Tampa Bay area.

Having seen and gone through many ups and downs in his life has given Chase the ability to write soulful music and lyrics, and his wide vocal range enables him to easily switch between musical genres.

“The tragedies give me a lot of my emotional lyrics,” he said, demonstrating his performance with a wide range of songs.

To hear his music, readers may visit www.marchasemusic.com. He may be contacted through his email at marcchase23@yahoo.com. The Marc Chase Band may be seen and heard at www.reverbnation.com.

To find out more about the American Ideals Foundation, visit, www.foundationofamericanidealsinc.org.