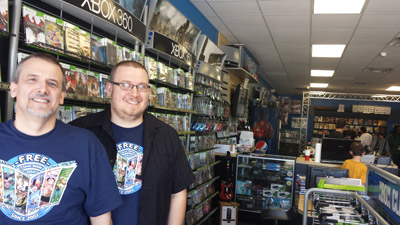 Troy Tyler and his son, Daniel, relaunched Game On Video Games & More earlier this year. The store features not only video games and consoles but a large selection of comic books. Kevin Brady photo.

Batman, Superman and Spiderman are alive and well at Game On Video Games & More.

The Riverview store was abuzz Saturday for National Comic Book Day, but while customers thumbed the pages of graphic novels and perused the latest video games depicting their heroes battling faceless villains, the owners of Game On continued fighting their own underdog battle against corporate superpowers armed to the teeth with money, power and influence.

Running an independent video and comic book store against corporate giants like GameStop may appear to be a mismatch, but Troy Tyler and his son Daniel  believe they have their own secret weapon: customer service.

“One of the primary reasons we opened the store is because we would go into a GameStop or Walmart to buy a video game and look for assistance and there was none to be found,” Troy said. “But we are going to talk to you and ask what you are looking for.

“Also, if someone comes up to us and asks ‘what do you think about this game?’ we will tell people the truth. If the game is not worth $60, we are going to tell you it’s not and that you should wait. I like to say it’s good old-fashioned American customer service the way mom-and-pop stores used to be. We want you to come here and talk to us and ask questions.”

The Tylers opened the store in 2011, sinking almost $100,000 into a Play N Trade franchise, which included games as well as six large-screen TVs where local gamers played regularly.

Their initial excitement with the new venture, however, turned to worry that the franchise owners were more concerned with collecting fees than helping grow the fledgling business.

Opening day 2011 found the Tylers excited and eager, until the second customer of the day walked in yelling and screaming, accusing Taylor’s store of “ripping him off” at its Bradenton store.

“He accused us of closing the store over the weekend in Bradenton and opening in Riverview,” said Troy, who somewhat placated the man by briefly explaining how franchises work. The Tylers made sure the man received the game he was promised, paying for the game even though he was not their customer.

“It was like that for the first week,” Troy said. “We had people calling, upset, some screaming, that the store had closed. I then did a little research and found that six stores within 30 minutes of our location had closed in the last eight months. So that franchise name I bought [for $35,000], that I had thought had some value, had no value.”

The Tylers showed more patience than most. “We tried to work with [the franchise owners] for two-and-a-half years but then by last year I was on the verge of bankruptcy,” Troy said. “We had to decide: Do we close the store and disappoint a huge customer base or rebrand the store?”

With a new focus on not only games but also comics, a unique combination for the Bay area, the Tylers relaunched the store in January.

“We still offer the same services we had before with new and used video games and the newest consoles like the Xbox ONE and PS4, but we took down the big-screen TVs and put up shelving and we are now selling comic books,” Troy said. For the old-school gamers, the store also features retro game systems like the original Nintendo.

Daniel Taylor, the gaming expert half of the father-son team, said too many stores treat gamers as numbers.

“We build relationships with our customers and bend over backwards. It all boils down to that personal touch, that’s what makes us different,” said Daniel, as young and old comic book fans and gamers visited the store Saturday, May 2, for Free Comic Book Day.

A nationwide event promoted by the comic book industry to introduce new fans, Free Comic Book Day is in its 13th year. Participating stores promise at least one — in the case of Game On, it was two — comic book to anyone who visits their store.

Game On’s mix of games and comic books may be unusual but there is a huge crossover interest in comic books and video games, Daniel said.