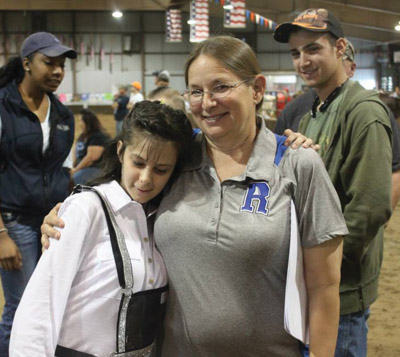 Think of special-needs students, and the first thing that comes to mind is not a cow — but a teacher at Riverview High School has been associating the two for a decade now in a program that parents think is nothing short of extraordinary.

“The program is the most valuable thing in her life,” said David Lander, whose daughter, Angela, has been in the Sassy Cows 4 Savvy Kids program at Riverview for two years.

“I have noticed a big change in her,” said Lander. “She gets up and wants to go to school; everything is about her cow. That’s all I hear. She’s already taking about walking her cow’s calf. I think it’s the best program ever made.”

“I love Mrs. Hamilton and Angel [her cow], they are the best,” Angela said.

Sassy Cows 4 Savvy Kids had its origins in 2000 when Johuas Holmes, a special-needs student in the Riverview Agriculture program, wanted to show a heifer. Joshua’s first calf was named “Sassy.” Through his eight years of involvement in Riverview FFA, or Future Farmers of America, Joshua was able to raise and exhibit several calves, all of which were named “Sassy.” 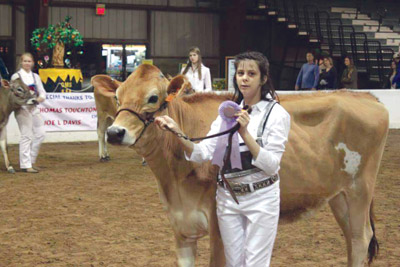 Angela Lander with her cow Angel at the 2015 Florida State Fair earlier this year. She was runner-up in the Grand Champion category.

Inspired by Joshua’s ability to grow and succeed in the project — learning to care for an animal, he also learned how to care for himself — Hamilton saw an opportunity to help other students with disabilities. With the help of local dairies, a lease program was started to provide an animal for those who could not afford to purchase one — and the Sassy Cow program was born in 2005.

“In seeing his [Joshua’s] reaction with the animals, I really felt that the special-needs students connected with the animals,” said Karen Hamilton, who came up with the idea for the program. What started with bottle-feeding a baby calf “took off from there,” said Hamilton, who has been teaching at Riverview for a decade.

The program is about much more than caring for animals, Hamilton said.

“It’s something different for them,” she said. “They learn responsibility. We go into everything from properly measuring the animal to weighing feed, and it’s just life skills they need to know and it’s one route to teaching it to them.”

As the program grew, “buddies” from the school’s FFA and agriculture program were partnered with the special-needs students, assisting in caring for and showing the animals at local livestock shows. The program draws 15 to 20 students a year, including buddies. 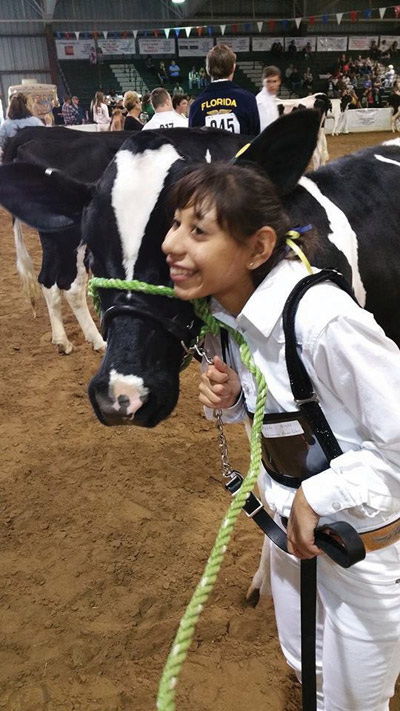 Veronica Poncia with her cow, Apple.

Tammy Poncia has noticed a big difference in her daughter’s persona since she joined the program two years ago.

Poncia said, “[Veronica] is more outgoing and more social. She is excited about the program because she ‘owns’ it; this is something that belongs to her. She takes pride in everything she does,” Poncia said.

While her daughter is petite, Poncia said, “being able to handle something that is much bigger than her is a big accomplishment. It’s a phenomenal program.”

“[Hamilton] is very dedicated to it,” Poncia said. “I know she even reaches into her own pocket for the program. She just goes above and beyond. I think there should be more programs for [special-needs] kids like that. It builds the kids’ self-image and social skills.”

While special-needs students are told “‘you can’t do that or you can’t go there,’ this program allows them to be treated just like [healthy] kids because they are judged with [mainstream] kids. I wish they would start it for kids in other counties.”

While many all too quickly write off the abilities of special-needs students, Hamilton is not among them.

“If they have something they like to do, they are going to learn a little bit more about it than just sitting in a classroom; but this is all hands-on, and that gets them a little more involved and they retain that information longer. They remind me some days of things we need to do that I told them a week ago. It’s very rewarding.”

For more information on the program, visit its website, www.sassycows4savvykids.weebly.com/ or the group’s Facebook page, “Sassy Cows 4 Savvy Kids.” 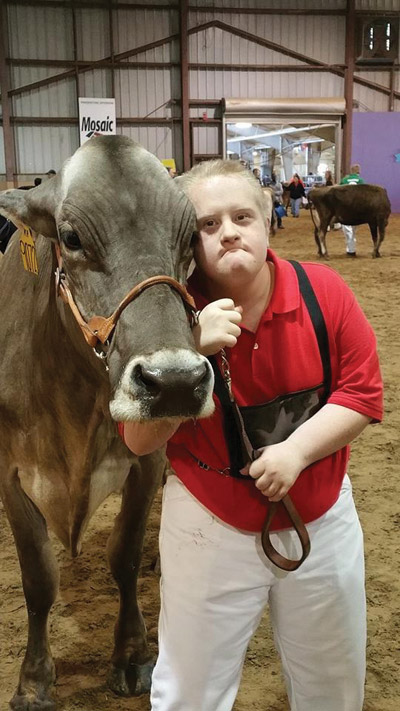 Joshua Holmes, who started showing cows in 2002, was the inspiration for the Sassy Cows program. Throughout his seven years of showing, he had a Sassy 1, Sassy 2, Sassy Cinnamon, and his last heifer, Sassy Jo. At left, he shows Sassy Jo (now 7 years old), at the 2015 Florida State Fair.