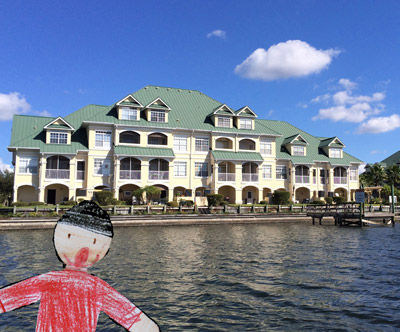 A mysterious yellow envelope showed up in  my mailbox one day last week with a postmark from Sunnyvale, Calif.  Curious, I tore it open — and out fluttered a crayon-colored cutout of a boy with a red shirt, green pants and a black cap, obviously rendered by a young child. Along with it was the following letter:

Can you help me with my Flat Stanley project? Please show him around Florida and send him back to my teacher,  Mrs. Bobbit, by April 20th. Thank you.

Hmmm, I thought. Of course, I’d do anything to help my seven-year-old nephew with his school project. But who in the world was Flat Stanley?  It took only a quick trip to the SouthShore Children’s Library to find the answer.  There, I discovered an entire shelf full of Flat Stanley I Can Read! books featuring the curious-looking flat kid as the central character.

Apparently, Stanley Lambchop was a boy who accidentally got flattened by a bulletin board while sleeping.  Dismayed by his flattened state, Stanley decides to make the best of a bad situation, embarking on a series of adventures in which his flatness actually works to his advantage. 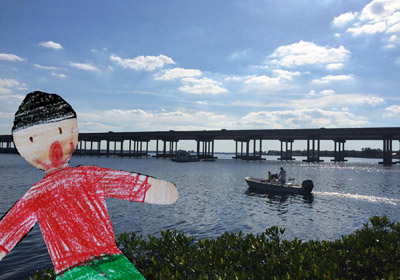 In the original book, written by Jeff Brown in 1964, he is used as a kite, mailed to his friend’s house in an envelope, and catches an art thief by posing as a painting on the museum wall.

Wow, I thought.  Judging by the date the original book was written, Flat Stanley would now be 51 years old!

Author Jeff Brown died in 2003, so the later books in the series were written by other authors, taking Flat Stanley all over the world, from Mount Rushmore to Egypt, Japan, Canada and Mexico.  Stanley even goes on an African safari, something many of us never get to experience in our own lives. I stifled the urge to feel a little bit jealous. 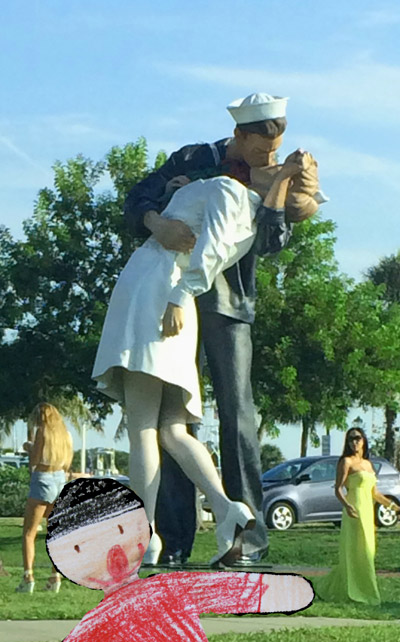 According to my research, the Flat Stanley Project emerged in 1995, conceived by Dale Hubert, a third-grade schoolteacher in Ontario, Canada.  Hubert designed the project to teach letter-writing and promote literacy to young students. Schoolchildren create a Flat Stanley figure and mail him to other people to take him on adventures and document his experiences.

Hubert received the Prime Minister’s Award for Teaching Excellence in 2001 for the Flat Stanley Project, probably never dreaming that his project would grow to such worldwide proportions.

Today, young students are exchanging letters about Stanley with other students all over the globe, not just through “snail mail” but email as well.  Teachers can now arrange exchanges with students in other countries on the Flat Stanley website, where they can publish stories, describe local traditions and scenery, and post photos.

Determined to accept the challenge bestowed upon me, I set about planning some interesting experiences for Stanley in Florida.

Our first stop was the Little Harbor Marina, where we watched workers launch large boats with cranes, and stack them one on top of each other for “high and dry” storage. 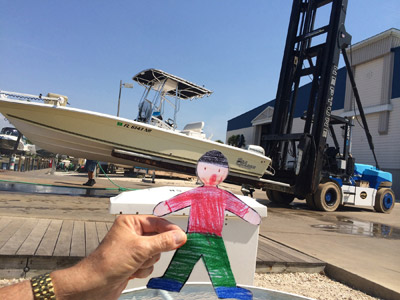 Stanley and I then took a boat ride on my friend’s 36-foot SeaRay Sundancer cabin cruiser.  With Stanley secured to the dashboard, we cruised around Apollo Beach, viewing homes, condos, ships and the TECO electric plant along the way.  At sunset, we headed out into Tampa Bay, where Stanley got to see the Skyway Bridge and the city of St. Petersburg outlined on the horizon.

On Day Two, Stanley and I drove to Bradenton, stopping to view the fishing boats on the Manatee River before crossing the bridge.  We walked out onto a pier lined with grass-roofed tiki huts, and stopped to visit a large pet snake that was slithering across the pavement.

We then headed to the Red Barn Flea Market, where we took in many colorful sights, including fruit and vegetable markets, clothing, jewelry, crafts and other unique wares. We visited a booth where a couple was selling lacquered Russian nesting dolls, which Stanley thought were unusual and very beautiful. 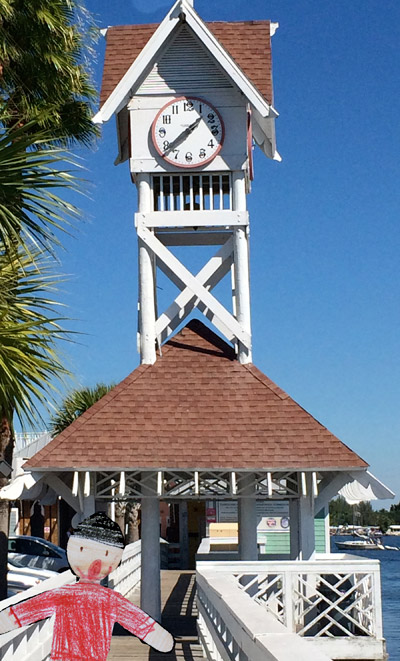 Stanley and I then drove to Anna Maria Island, where we ate lunch at Bridge Tenders Inn and took pictures of sailboats and the tall white clocktower on the pier.  After lunch, we headed to St. Armand’s Circle in Sarasota, which was crowded with many cool shops, art galleries and cafés.

Before heading home, we stopped to take pictures of the 25-foot sculpture of the Sailor Kissing a Nurse, which made Stanley giggle a little.

That night, I asked Stanley if he’d had a good time in Florida.  He just grinned and said nothing.  So I tucked him into the yellow manila envelope to get a good night’s sleep before making his journey back home to California the following day.  Then I turned out the light, and fell into bed, quite exhausted from our adventurous day. 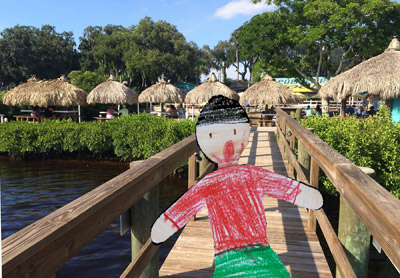 A remarkable river respite for walkers in Tampa