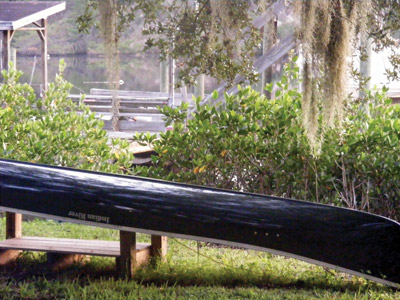 Only boats with no motors can participate in the cleanup.

South County residents interested in saving native plants and wildlife are asked to help with the cleanup of the Cockroach Bay barrier islands on Saturday, Dec. 13.

“The native wildlife is losing its food source,” said Mariella Smith, a Ruskin resident and longtime environmentalist who serves on the executive board of the Tampa Bay Sierra Club.

What happens is that invasive plants crowd out the native plants that are the natural food of local wildlife. The invaders take all their food (nutrients and minerals) and water from the soil, and also shade over native plants so they don’t get any sun.

According to event organizers, kayaks and canoes are especially welcome, and volunteers should bring a refillable container for drinking water. Trash bags, bug spray, sunblock and gloves will be provided.

“We’ll be picking up trash and clearing invasive nonnative plants from 8 a.m. to noon,” Smith said.

Located in Ruskin, the state-owned portion of Cockroach Bay has 138 acres that are infested with nonnative species.

The barrier islands of the preserve originally belonged to the state as part of the Florida Department of Environmental Protection Nature Buffer Preserve, but about 10 years ago the state gave them to the State Parks Department and designated them a park.

Meanwhile, Hillsborough County Parks, Recreation and Conservation Department workers have continued to keep the upland areas under county supervision cleaned and maintained, but the islands have become overgrown to the point where wildlife and natural vegetation are endangered.

“County staff has worked very hard to eradicate the Brazilian peppers that take over and push all the native plants out,” Smith said.

Plans for upkeep and maintenance of the area are made for a period of 10 years, and the new 10-year plan is being made now, said Gus Meunch, who has crabbed commercially in the area since 1976 and is the inventor of a special kind of oyster reef.

Meunch, the owner of Gus’s Crabby Adventures, Oyster Reef Designs, agrees that it is important to keep the barrier islands cleaned and free of invasive vegetation if the area wildlife is expected to survive.

Led by the Sierra Club, local environmentalists are working hard to ensure that the new 10-year plan be front-loaded with active cleanup and preservation methods because when they get as out of hand as they are now, it is very difficult and expensive to clean up.

“Twenty-four percent of the uplands are currently covered in invasive plants, and the new management plan only calls for treating two acres a year,” Smith said. “That’s not enough to bring these pest plants under control.”

Not only gopher tortoises and birds are at risk, but aquatic life that uses the mangroves as estuary are also endangered by lack of minerals and nutrients when invasive plants take over the soil.

This puts all small animals and fish in danger of losing their habitat and also makes the islands unsuitable for visits by humans who want to observe wildlife and see Florida’s pristine wilderness.

Local environmentalists wondered why the state held its meeting about the new 10-year plan in Palmetto and advertised only in the Bradenton Herald, when the bay is in Hillsborough County.

The meeting was held Nov. 19, and a report was given showing how the preserve would be addressed in the next 10 years.

Because of environmental concerns brought out at this meeting, and because of citizen concerns about the lack of notice to Hillsborough County residents about the first meeting, the state has agreed to hold another public meeting Tuesday, Jan. 6, at 7 p.m. at the SouthShore Regional Library, 15816 Beth Shields Way in Ruskin.

The state has agreed to accept community input for two weeks following the Jan. 6 workshop.